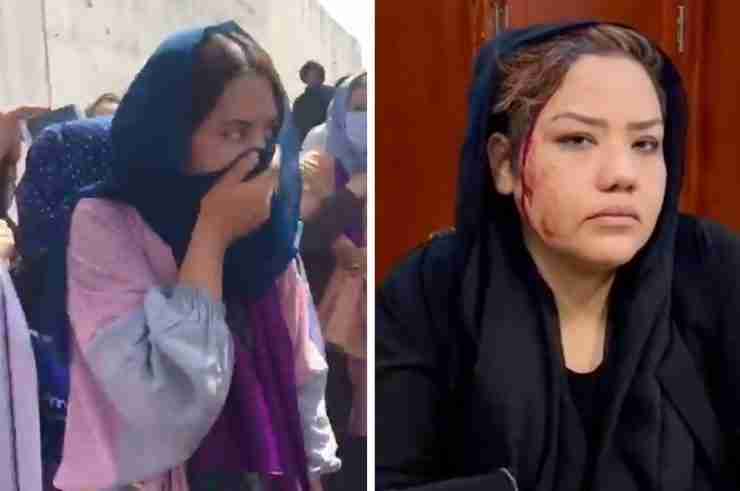 Women who took to the streets of Kabul to protest for their rights after the Taliban took control of Afghanistan were met with violence from Taliban security forces on Sunday Sep 5.

Several of the women, who were demanding the right to work and to be included in a new government to be formed by the Taliban, told the New York Times they had been beaten by Taliban fighters.

The protesters say they were hit with tear gas and pepper spray when they tried to walk from a bridge to the presidential palace, according to the BBC.

“When I tried to resist and continue the march, one of the armed Taliban pushed me and hit me with a sharp metal device,” she said.

She added that she was knocked unconscious and had to receive five stitches to a head wound.

Taliban fighters also forced foreign journalists who were covering the demonstration to the ground at gunpoint and hit at least one journalist, the Guardian reported.

A video of a woman protester with blood running down her face shared by Zaki Daryabi, the Editor-in-Chief of EtilaatRoz, an investigative newspaper, has gone viral on Twitter.

On Sunday, the Taliban spokesperson told the Guardian that the group had arrested four men who hit the women protesters and held journalists at gunpoint, the Guardian reported.

“They were from a checkpoint. They mistreated the women and a reporter from Al Arabiya. Police from the intelligence department came, put the situation under control and arrested them [the Taliban],” Zabihullah Mujahid told the Guardian.

However, the Guardian reported that Mujahid refused to guarantee a right to protest when he was asked if women could demonstrate safely again.

“It’s not a time for protest as Taliban control is new and all offices are closed. And we witnessed the airport explosions, insecurity will occur,” he said. “They should be patient and wait for the government to established, then they can have demands. We ask people to not cause disruption for themselves and the authorities.”

This is some of the first concrete evidence of the Taliban’s harsh treatment of women, according to the New York Times.

After taking power, the Taliban had said in its first press conference that women would be“afforded their rights” and would be “very active within our society”, being allowed to work and study “within the bounds of Islamic law.” The group has yet to clarify or define what that means.

Separately, witnesses have told the BBC that the Taliban has killed a pregnant woman police officer in front of her relatives in a provincial city.

The woman, named in local media as Banu Negar, was beaten and killed at her family home on Saturday in front of her husband and children in Firozkoh, the capital of central Ghor province, according to the BBC.

The Taliban have denied their involvement in the killing and said they are investigating the incident.