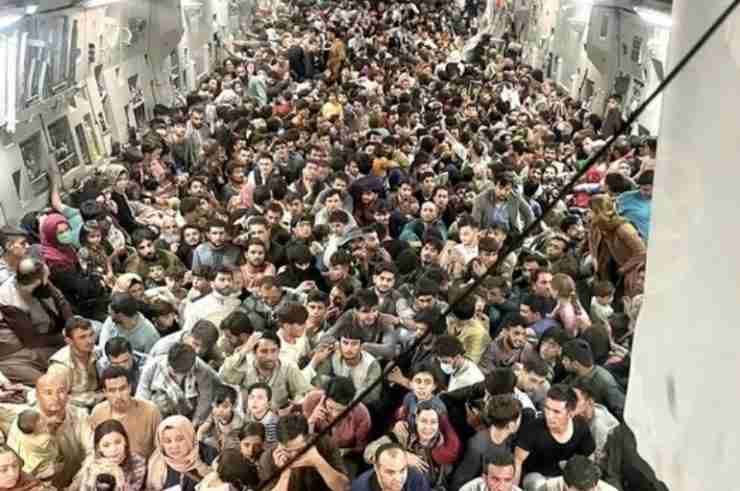 A photo showing 640 Afghans packed into a US military aircraft evacuating from Kabul has become one of the defining images of Afghanistan’s collapse after the Taliban regained control of the country on Sunday Aug. 15.

The picture, obtained by Defense One from the military, shows hundreds of civilians packed into the C-17 Globemaster III as it departed Kabul for Qatar.

US authorities said the passengers on the flight, including women and children, were safely evacuated on Sunday.

The flight had not intended to take on so many passengers – among the highest number of people ever carried in a C-17 – but some panicked Afghans had pulled themselves onto the half-open ramp, according to Defense One.

But instead of forcing them off, the crew decided to take off.

“The unusually high number of passengers aboard this aircraft that left [Hamid Karzai International Airport] that evening was the result of a dynamic security environment that necessitated quick decision making by the crew, which ultimately ensured that these passengers were safely taken outside the country,” a spokesperson from the US Central Command said in a statement.

The flight was one of several that took off with hundreds onboard, according to the BBC.

Thousands of people in Afghanistan had swarmed the airport in desperate attempts to flee the country.

Videos showed people rushing onto the runways and clinging onto the sides of a departing plane.

Another video showed two people falling from the underside of a US military aircraft after it took off.

At least five people, including the two who fell to their deaths, were killed in the chaos, Reuters reported.

Flights out of the airport, which US forces took control over, were suspended much of Monday but resumed on Tuesday.

More than 60 countries have issued a joint statement distributed by the US State Department calling on those in power in Afghanistan to allow Afghans and international citizens who wish to leave the country to depart.