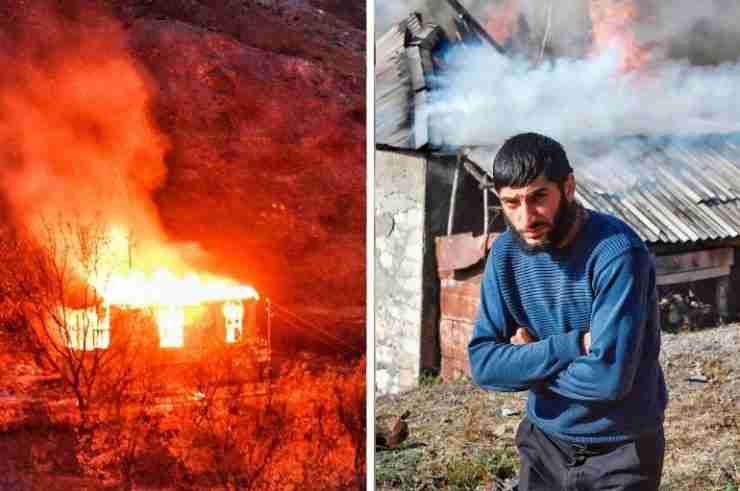 Ethnic Armenian villagers in Kalbajar district in Azerbaijan burnt down their homes this week before fleeing to Armenia on Sunday Nov. 15, when Azerbaijan was scheduled to take control of the region as part of a ceasefire agreement.

Armenia and Azerbaijan agreed to the peace deal on Monday Nov. 9 after six weeks of fighting in the disputed Nagorno-Karabakh region.

The region is internationally recognized as part of Azerbajian but is made up of an ethnic Armenian majority who are mostly Christian. Nagorno-Karabakh was initially given to Azerbaijan, a Muslim-majority country, by Joseph Stalin in 1921.

In 1988, following the dissolution of the Soviet Union, Nagorno-Karabakh’s legislature passed a resolution stating it wanted to join Armenia and declared itself independent three years later. In 1991, a war erupted between Armenia and Azerbaijan over the region. The war, which killed more than 30,000 people and displaced hundreds of thousands of Azerbaijanis and Armenians, ended with a Russia-brokered ceasefire three years later.

Despite international attempts at finding a diplomatic solution to the conflict, multiple violations of the ceasefire have since occurred, with the most recent incident breaking out in September and ending on Monday with the peace agreement.

Under the terms, Armenia must withdraw from Kalbajar, as well as the Aghdam and Lachin districts, three areas it has held since the war in the 1990s, by Dec. 1. “This is my house, I can’t leave it to the Turks,” a resident in Charektar village in Kalbajar told AFP as he threw burning wooden planks and rags soaked in gasoline into an empty house.

Armenians often refer to Azerbaijanis as ‘Turks.’ Another resident, Arsen, 35, told Reuters they had no desire to leave anything useful for the Azerbaijanis. “They will have to build their own houses from scratch,” he said.