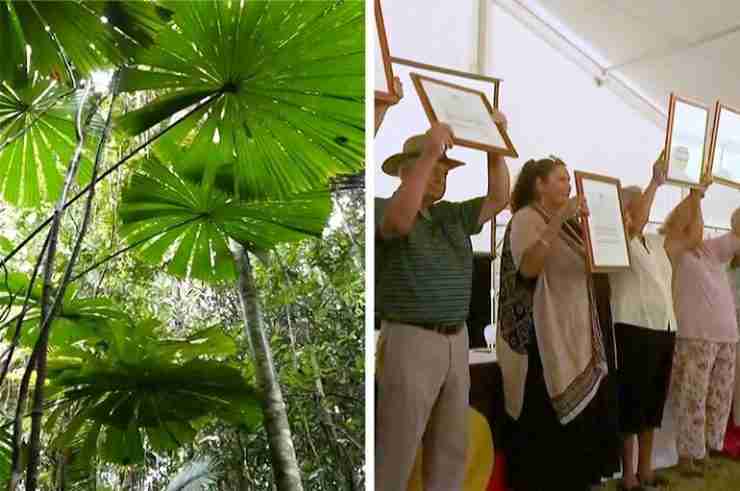 The world’s oldest tropical rainforest, Daintree Rainforest, in Australia has been returned to Aboriginal people in an official acknowledgment ceremony on Wednesday Sep. 29.

A UNESCO World Heritage site, Daintree is over 180 million years old and has been the home of Eastern Kuku Yalanji Aboriginal people for more than 50,000 years.

Under a signed agreement following four years of negotiations, Eastern Kuku Yalanji people will now co-manage nearly 160,000 hectares of land, including Daintree and the Cedar Bay, Black Mountain and the Hope Islands National Parks in northeast Australia, with the Queensland state government.

The government said the parks will eventually be solely managed by the Eastern Kuku Yalanji people.

“I can’t explain it except that my heart and my spirit is just so full,” Indigenous representative Lynette Rose Johnson told Reuters.

“And I give thanks to those that have long gone and it was their dream. And now that dream has become a reality,” she added.

“The Eastern Kuku Yalanji people’s culture is one of the world’s oldest living cultures and this agreement recognizes their right to own and manage their country, to protect their culture and to share it with visitors as they become leaders in the tourism industry,” Australia’s Environment Minister Meaghan Scanlon said in a statement.

Since 1788, the aboriginal land was taken over by British colonists who claimed it belonged to no one, according to NPR.

Scanlon described the land returned as “a key step on the path towards reconciliation” and to “right the wrongs of some of the past in this state.”

Australia has denied the rights of indigenous people and discriminated against them, as shown in both past and present accounts.

Chrissy Grant, a member of the Eastern Kuku Yalanji negotiating committee, said in a statement that the goal was to provide opportunities for their people “to fill positions from a wide range of skilled trades, land and sea management, hospitality, tourism and research so that we are in control of our own destinies.”

The Daintree region is recognized by UNESCO for its rich and unique biodiversity and contains relics of the Gondwana forests, which existed before the continents of Australia and Antartica split up around 50 to 100 million years ago.