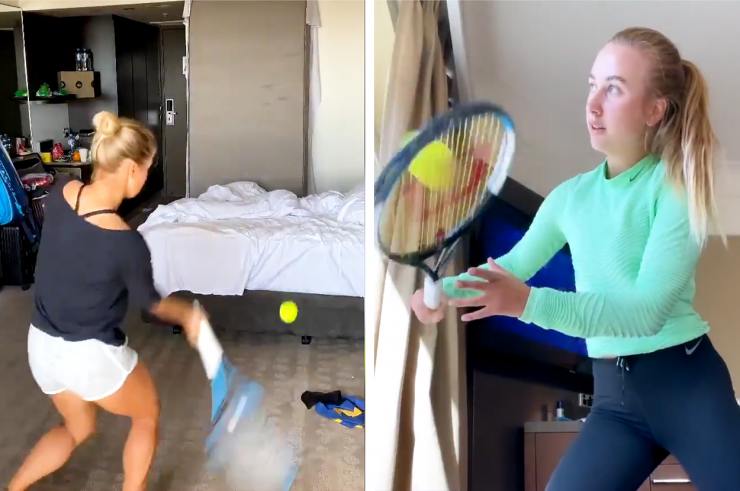 Forced to quarantine for 14 days in hotel rooms in Melbourne ahead of the Australian Open on Feb. 8, tennis players participating in the Grand Slam are coming up with creative ways to keep up their training routines in their rooms.

72 players have been told to isolate for the full 14-day mandatory quarantine period after they arrived on three separate flights with passengers that later tested positive for coronavirus, Bloomberg News reported.

More than 1,200 officials, players and support teams who had arrived in Australia prior are already taking part in the mandatory two-week quarantine but are allowed out of their rooms for five hours a day for training and treatment with daily COVID-19 tests.

Some of the players in isolation have since gone viral on social media after they shared videos of them training indoors, running up and down the hotel room and hitting balls against different surfaces with their rackets.

The world’s No. 1 male tennis player, Novak Djokovic, who is quarantining under more lenient rules in Adelaide, reportedly sent the director of the Australian Open a list of demands on behalf of the players in lockdown.

The premier of Victoria State, where Melbourne is located, told reporters on Monday that “people are free to provide lists of demands but the answer is no,” adding that “there’s no special treatment here,” the Guardian reported 🎾😂