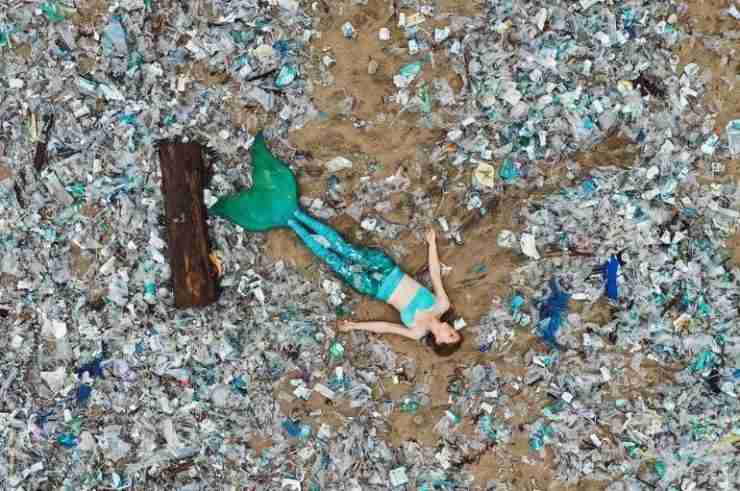 People in Bali, who spent the first days of 2021 cleaning tons of trash that had washed up onto the famous Kuta Beach, were taken by surprise when they saw a woman dressed in a mermaid costume lying among the plastic waste on Monday Jan. 4.

Photos of the “mermaid” went viral, and the woman was later identified as Laura, a 35-year-old Belgian ocean advocate, who later shared the photos from her shoot on her social media @laurainwaterland.

Laura told Almost she was hit with the reality of how much plastic people use when she started traveling in South East Asia and decided to create a photoshoot to bring attention to the issue. She said she chose to dress as a mermaid because she wanted to convey the image of a beached sea creature, and mermaids are perceived as “beautiful and free.” “Having the scale of a ‘mermaid’ next to the amount really emphasizes how much [plastic waste] there really is, in just one beach,” she said.

Bali’s beaches are washed with rubbish during monsoon season every year, and volunteers cleared 30 tons of marine debris from the beach during the first days of 2021, according to local media Antara.

Laura said she had hoped that her photoshoot would capture people’s attention but never expected to gain this amount of attention. “People have expressed shock a lot because it’s hard to imagine the quantity of plastic that’s out there,” she said. “You always hear big numbers but they’re very abstract. Seeing it at scale on my shot seems to have helped many people realize how huge this issue really is.”

She added that she has been trying to redirect people to Indonesian influencers and initiatives, as well as organizations such as @breakfreefromplastic to help further the cause.