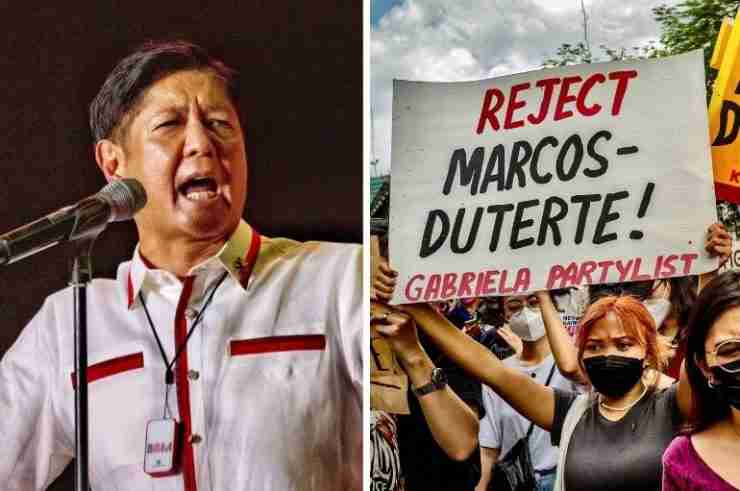 The son of a former Filipino dictator, Ferdinand “Bongbong” Marcos Jr, claimed victory on Wednesday May 11 as the country’s new president after results showed he had won in a landslide.

With over 98% of the votes officially counted from the vote on Monday May 9, Marcos Jr – who ran with Sara Duterte, the daughter of incumbent hardliner president Rodrigo Duterte – obtained more than 31 million votes.

That is almost double the votes of his rival, vice-president and human rights advocate Leni Robredo, who garnered about 14 million votes.

The 64-year old ran under the slogan, “Together we shall rise again”, which evoked a sense of nostalgia to his father’s dictatorship from 1965 to 1986, a period marked by martial law and widespread human rights abuses, corruption and poverty, according to the BBC.

Marcos Jr and his family had fled to Hawaii after a pro-democracy uprising in 1986 ended the dictatorship.

In 1991, Marcos Jr returned back to the Philippines and has been a member of congress and senate since.

Months before the elections, Robredo’s supporters fought against a massive misinformation campaign on social media, which glorified the Marcos’ violent regime as the “golden age” of the Philippines.

Video clips on YouTube and TikTok distorted details of the martial law period, often described as one of the most painful episodes in the country’s history, and corruption cases against the Marcos family.

Thousands of young voters took to the streets to protest the election results on Tuesday, citing voting irregularities.

Despite reports of voting machine malfunctions, the Commission on Elections has said the problem was too small to even make a difference in the results.

An official result is expected later, but local and international media have declared Marcos Jr as the obvious winner.

Marcos Jr has called for people not to judge him by his ancestors but by his actions.

“It is [my] promise to be a president for all Filipinos,” he said in a statement via a spokesperson on Tuesday, BBC reported.

His victory has shocked many who still remember the human rights abuses under his father’s dictatorship.

“What authority does he have to govern a country whose people were plundered by his father?” Roman Catholic priest, Robert Reyes, told the New York Times.

The Catholic church has a massive influence in the country and played a crucial role in overthrowing the Marcos dictatorship, according to the New York times.

Marcos Jr’s opponents fear that he will halt ongoing corruption investigations against his family and Duterte’s “war on drugs” campaign, which has led to the death of more than 12,000 people, some in extrajudicial killings, according to Human Rights Watch.