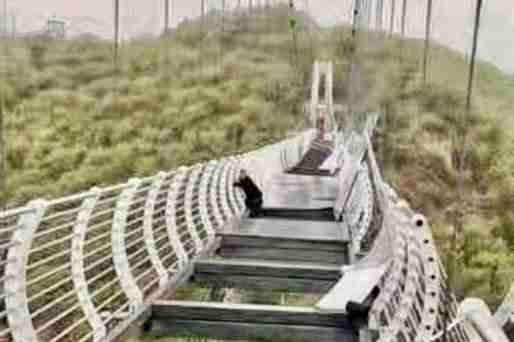 The tourist was trapped on the 100 metre high Piyan Mountain bridge until authorities came to his rescue half an hour later, Guardian reported.

Photos shared on China’s social media platform Weibo went viral, showing the man clinging to the side surrounded by gaping holes. Reports from state media said the man crawled to safety and was sent to hospital for assessment, according to New York Times.

The Jilin Daily, a provincial newspaper, reported the bridge had since been closed and is under inspections, New York Times reported.

The episode raised questions amongst people in China regarding the safety of the country’s numerous glass bridges, walkways, and observation decks.

“So many glass-deck bridges have been built in recent years and are very popular with tourists. But how can we ensure their safety?” said one commenter, Guardian reported.

In recent years, construction of glass-bottomed bridges have increased in part due to demand for thrilling attractions. There are around 2,300 such bridges in China, according to NYT.