Zhu Keming, a shepherd in northwest China, saved six runners from a 100-kilometer ultramarathon where 21 runners died due to extreme weather.

Zhu Keming, a shepherd in northwest China, saved six runners from a 100-kilometer ultramarathon where 21 runners died due to extreme weather.

Zhu was grazing his sheep at the high-altitude Mountain Huanghe Shilin in Gansu Province on Saturday May 22, when the weather started to worsen, according to China National Radio.

As the temperature plunged drastically to below-freezing and rain, hail and high winds hit the running track, he stored firewood and clothes in a cave nearby, where he ended up escorting the runners to take refuge.

After he rescued the first runner, four more distressed runners made it into the cave and told the shepherd there were others marooned outside, some unconscious, AFP reported. Zhu then rushed out to search for them and saved the sixth runner.

“The weather on that day was very unusual,” Zhu told China National Radio. “It was foggy, rainy, and windy and sometimes hailing.”

“I want to say how grateful I am to the man who saved me,” Zhang Xiaotao, one of the six survivors, wrote on social media. “Without him, I would have been left out there.”

Zhu, who ended up saving three men and three women, told state media that he was “just an ordinary person who did a very ordinary thing”, adding that he was sorry he couldn’t save others.

Most of the runners who took part suffered from hypothermia, and 172 were reported missing. A rescue operation was soon launched after the race was halted over the weather conditions, but 21 accomplished marathoners did not survive.

The deaths has sparked controversy, with people on social media criticizing the organization’s lack of contingency planning.

The mayor of Baiyin, the city where the ultramarathon took place, sent his condolences to the victims and their families at a press conference on Sunday May 23. 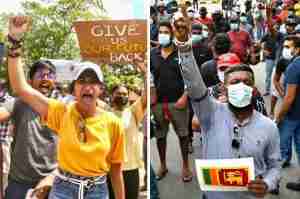