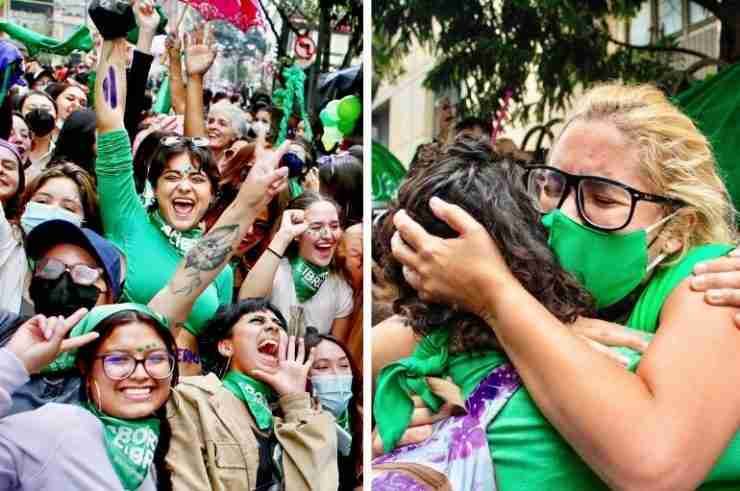 Prior to the ruling, abortion in Colombia was only legal in certain circumstances: when the mother’s life is at risk, if the fetus has life-threatening abnormalities or when the pregnancy is a result of rape or incest.

If women seek abortions outside of these circumstances, they could face up to four and a half years in jail.

Around 400,000 abortions are carried out in Colombia every year, but only 10% of the cases are performed legally, according to the Guardian.

Between 2006 and 2019, at least 350 women were convicted of or sanctioned for having abortions, according to Causta Justa, a Colombian women’s rights group.

Abortion rights groups filed a lawsuit against the country’s abortion laws in 2020, arguing that the laws discriminated against women from lower income areas who had less access to medical staff who could help prove when carrying out their pregnancies was a health risk.

On Monday Feb. 21, the constitutional court voted five against four to decriminalize abortion in the first 24 weeks of pregnancy.

After the ruling, abortion rights groups dressed in green, the color representing pro-choice movement, marched through Bogotá, the capital, and other major cities to celebrate the victory.

“We celebrate this ruling as a historic victory for the women’s movement in Colombia that has fought for decades for the recognition of their rights,” Amnesty International said.

“In constitutionally protecting our autonomy over our own bodies and lives, the court is changing the lives of millions of vulnerable women and girls disproportionally harmed by abortion restrictions,” the Women’s Equality Center said.

Colombia’s ruling is another victory for the feminist Green Wave movement in Latin American, which has grown in recent years. Last September, Mexico’s supreme court found it unconstitutional to criminalize abortion. In 2020, Argentina became the largest Latin American country to legalize abortion.

Women’s right groups hope this decision will continue to cause a ripple effect on other Latin American countries.

As a majority catholic region, abortion is looked down upon in Latin America. Countries such as El Salvador, Honduras, Nicaragua, and Dominican Republic ban abortions completely.

While advocacy groups had hoped to fully decriminalize abortion in Colombia, the ruling is still a “historic step,” a lawyer for the Center for Reproductive Rights said.