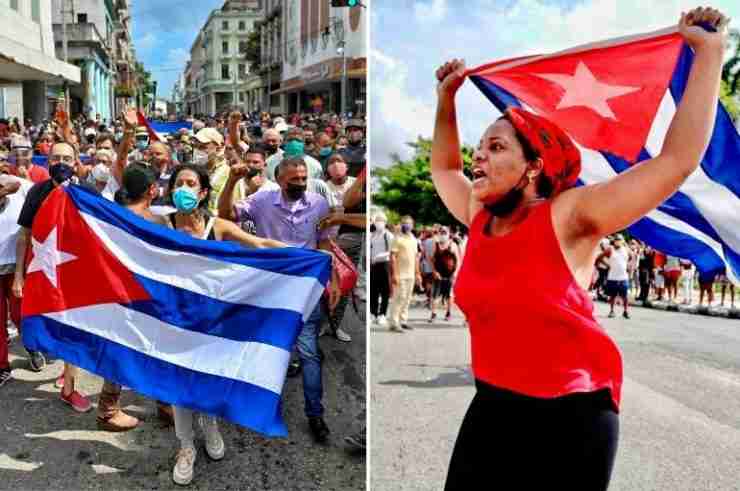 Thousands of people in Cuba have taken to the streets in some of the biggest demonstrations against the communist government in decades.

The anti-government protests began in the city of San Antonio de los Baños, southwest of Havana, on Sunday July 11 and quickly spread throughout the country and to Miami in the US as people shared photos and videos and went live on social media.

Protesters voiced their anger toward the communist government’s handling of the country’s economic crisis – which has led to food and medicine shortages – daily blackouts, and the coronavirus pandemic.

They also demonstrated against the shortage of coronavirus vaccines. Cuba reported a record 6,923 new cases and 47 deaths on Sunday and only 15% of the population is fully vaccinated, according to the government.

The country has been experiencing an economic crisis for two years, which has worsened as the pandemic shut down tourism, which is a key source of revenue for the country.

People now spend hours in line every day to buy medicine and basic food items while lockdowns have put many out of work, the New York Times reported.

“This is the day: we can’t take it anymore. There is no food, there is no medicine, there is no freedom. They do not let us live. We are already tired,” a protester name Alejandro told the BBC.

The government has blamed the economic crisis on US sanctions and the pandemic.

In response to the protests, president Miguel Díaz-Canel called on government supporters to take to the streets and confront the protesters in a nationwide broadcast.

“We call all revolutionaries to hit the streets to defend the revolution everywhere,” he said. “Over our dead bodies. We are prepared to do anything.”

He blamed the US for destabilizing and weakening the island’s economy to “provoke a massive implosion,” the New York Times reported.

Experts say the protests are the first time that so many people have openly protested against the Communist government since 1994.