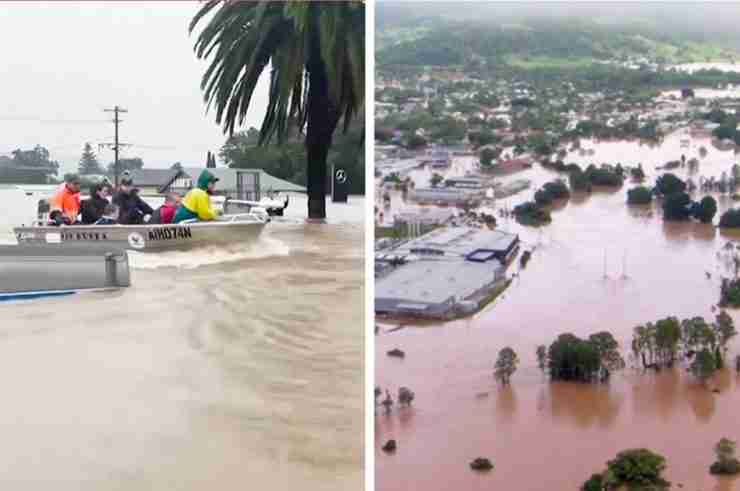 Eastern Australia has been hit by a “rain bomb” that has caused unprecedented flooding that has submerged towns and killed at least 10 people.

Torrential rainfalls have been pummeling Queensland and New South Wales since Feb. 22, leaving more than 15,000 homes flooded in Queensland, according to the Guardian.

Authorities said the events were “unprecedented”, with several areas in Queensland recording more than one meter of rainfall, and New South Wales having 2.5 times more rainfall than its monthly average.

Authorities say rainfall totals have hit up to 1.5 meters in just one week, which is normally the amount expected over a year.

Flood-prone Lismore in NSW has had a record-breaking flood. Thousands of residents required evacuating, with many rescued from their roofs after flood waters breached the levee before dawn. The entire CBD remains under water. The town recorded 181mm of rain in 30 minutes at one stage. At 3pm on Monday, the Wilsons River level was 14.37 metres and steady, more than two metres above the record flood level of February 1954 (12.27 metres).

Tens of thousands of people have been told to evacuate, schools were shut down, and public transportation was canceled or severely affected.

The death toll stood at 10 as of March 1, as flash flooding continued to affect thousands, authorities said.

Australians shared before and after pictures of the flooding, depicting the full extent of the disaster.

Hundreds of people are stranded on bridges and highway waiting for rescue.

The government has started clean-up efforts in certain cities, but other areas are still on alert with ongoing evacuation efforts.

Heavy rainfall and flash floods are predicted to continue in the coming days.

Eastern Australia is no stranger to rain, but experts suggest that climate change intensified the events. As the world gets hotter, dry and wet seasons become more intense in Australia.