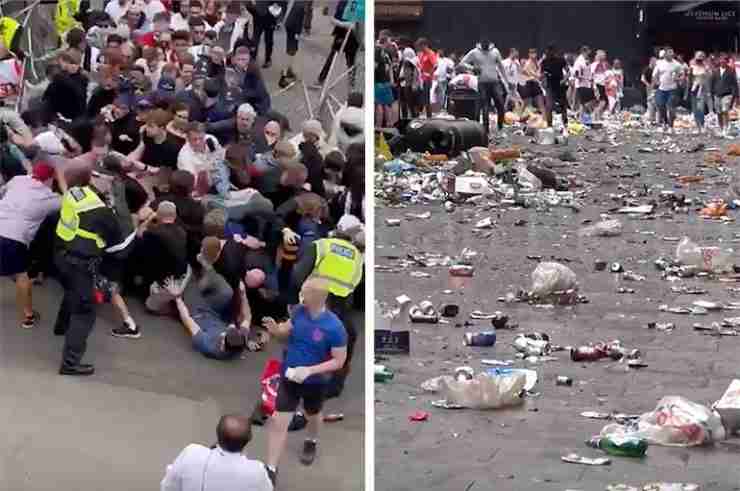 England football fans have trashed parts of London in the lead up to and after the team’s Euro 2020 final match against Italy.

The match, which took place on Sunday July 11, was the first time England had made it to the final of a major football tournament since it won the World Cup in 1966, and fans struggled to contain their excitement.

And thousands of fans took to the streets across London ahead of the match, leaving parts of London trashed.

Some people criticized the maskless celebration amid the COVID-19 pandemic.

They also criticized the lack of police response, compared to the crackdown on peaceful mourners at a vigil for Sarah Everard, a British woman murdered by a police officer while she was walking home at night.

Footage online also showed fans, mad over the loss, punching other members of the audience, including a child and an Asian man.

The London Met Police said 45 people had been arrested.

As the footage of the violent scenes went viral on social media, a lot of people started sharing resources to report domestic violence, which increases when England plays.

People expressed their disappointment at the fans’ behavior.

And called out the double standards faced by minority players and players of color.

The Football Association has issued a statement condemning the racial abuse.

“It’s just not what we stand for,” he said. “We have been a beacon of light in bringing people together in people being able to relate to the national team, and the national team stands for everybody, and so that togetherness has to continue. We have shown the power our country has when it does come together and has that energy and positivity together.”

Others, meanwhile, showed their support for the three players and flooded their social media accounts with positive comments to drown out the hatred.