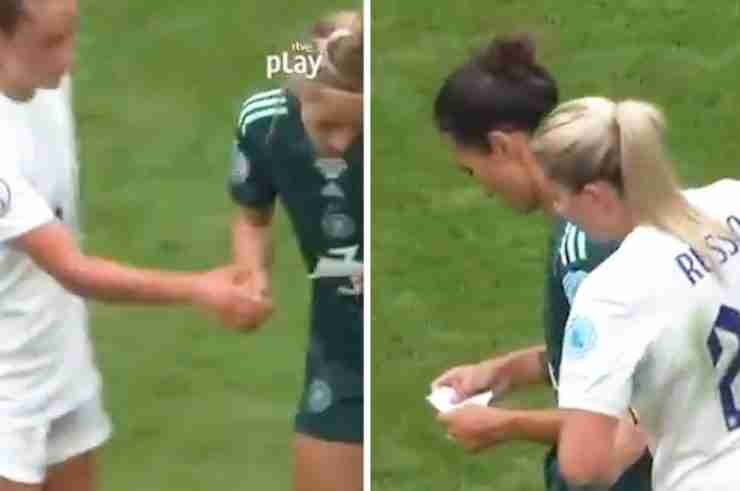 England’s women soccer players were caught trying to read Germany’s tactic note during the 2022 European Women’s Championship final, and fans couldn’t help but turn it into a meme.

Germany and England faced each other for the Euro 2022 final at Wembley Stadium in London on Sunday night, with the English team winning its first major women’s championship.

Both teams scored a goal during the first 90 minutes, which brought the game into extra time.

During the 110th minute, Chloe Kelly of England scored a decisive goal bringing the scoreboard 2-1.

Moments after Kelly’s goal, and with not much time left until the end of the match, Germany made a player substitution.

Germany’s Lena Lattwein then came onto the pitch with a tactic note from the team’s manager, which was passed among other German players.

England’s Ella Toone can be seen trying to casually intercept the note. Meanwhile, England’s Alessia Russo was also caught looking at the note over her opponent’s shoulder.

Fans found the sneakiness hilarious and took to Twitter to speculate about the content of the note.

Some thought the note contained a message reading, “It’s coming home”, as a nod to England’s victory.

Another user joked that the paper contained a diagram that gave instructions for scoring a goal.

The final became the most attended Euro match in both the women and men’s categories ever, with over 87,000 people in the crowd.