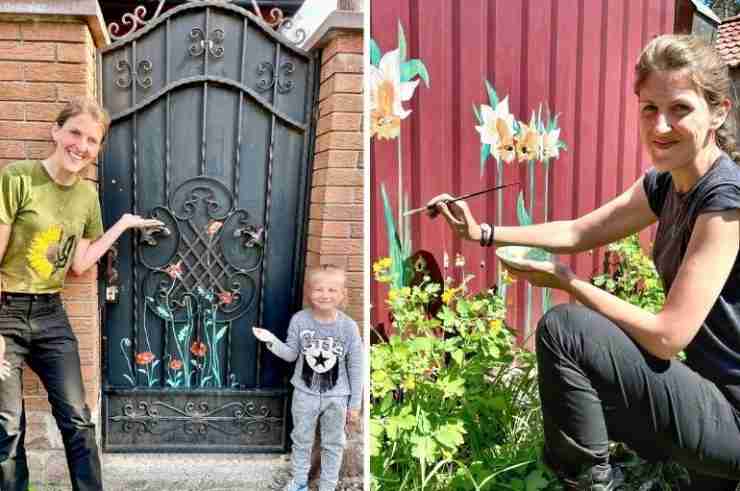 Meet Ivanka Siolkowsky, a Ukrainian-Canadian woman who has been painting flowers over bullet holes left over from the war in Ukraine’s Bucha.

Born in Canada, Siolkowsky – whose grandparents on both her father and mother’s side came from Ukraine – traveled to the Polish border and then to Ukraine to help after the war broke out.

When she arrived in Bucha, she decided to stay for longer.

“I was impressed by the beauty of the city, as a whole, and how quickly the cleanup and rebuild had begun,” Siolkowsky told Almost. “I wanted to be apart of it, because I wanted to make it a safe and happy place for children to return to.”

It was here that she met a man called Sasha, who had lost his son in the war and had his house bombed and burned to the ground.

“He told me he wanted to leave because there was no joy left in this city any more,” Siolkowsky said. “All he sees are bullet holes in his fence reminding him of his loss.”

She decided she wanted to erase the bullet holes for him and remind him of the joy that was, she said.

Sasha had told her his favorite flower was daffodils, so she started painting daffodils.

After she started, neighbors started approaching her while she was painting and asking her if she could paint their fences next.

Now Siolkowsky has painted five fences on the same block, and says that she hopes that the people of Bucha and other cities in Ukraine will begin painting their own fences.

“My goal was to paint one fence, and make one man smile,” she said. “Never did I think neighbors would then request it, nor did I think the whole world would soon see it.

“Ukraine will overcome,” she added. “No matter how hard the Russians try, they can’t and won’t take away our culture.”