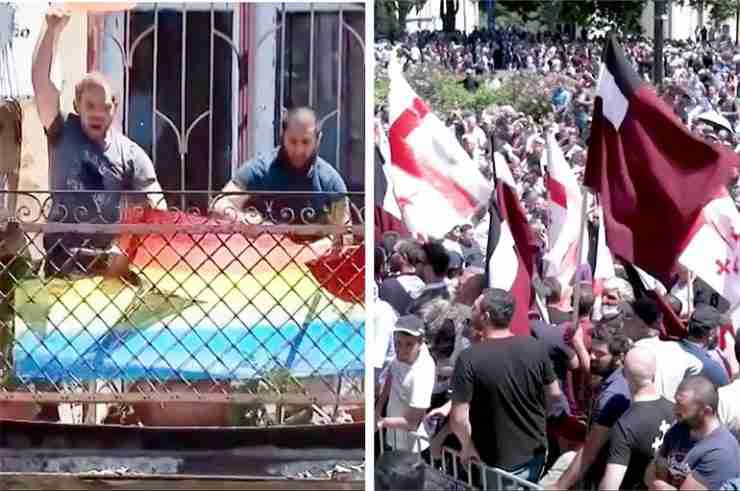 A pride march in the Georgian capital of Tbilisi was canceled to protect participants from violent far-right and anti-LGBTQ protesters.

On MondayJuly 5, far-right protesteors broke into the headquarters of Tbilisi Pride in the city center and attacked journalists who were there to cover the march.

Organizers said at least 50 journalists were injured, and a rainbow flag was torn down and burned on the street. Organizers said their equipment had also been broken.

Few police were present and failed to stop the violence and protect the activists, Amnesty International said.

The Orthodox Church backed the far-right protestors and held a prayer meeting opposed to the Pride march.

Following the attack, Tbilisi Pride organizers announced that they were canceling the event over concerns for the safety of attendees.

“The authorities did not ensure the security of the community and our supporters,” Tbilisi Pride wrote on Twitter on Monday. “We can not go to the streets full of violent people backed by the authorities and patriarchate and put people’s lives at risk!”

Georgia’s interior ministry had previously called on the organizers to cancel the Pride march due to safety concerns, while Prime Minister Irakli Gharibashviil called the event “unacceptable for a large segment of the Georgian society”, BBC reported.

Garibashvili also said on Monday that it was “unreasonable” to hold the Pride event in a public place that could lead to “civil confrontation,” the Guardian reported.

Human rights organizations have condemned the violence and said Garibashvili was emboldening hate groups, according to Reuters.

On Tuesday, LGBT activists and supporters gathered in central Tbilisi to show support for the LGBT community.

The US, UK, EU and other countries issued a joint statement condemning the attacks, as well as “the failure of the government leaders and religious officials to condemn this violence.”

The statement called on authorities in Georgia to “to act swiftly to protect those exercising their Constitutional rights to freedom of expression and assembly, to protect journalists exercising freedom of the press, and to publicly condemn violence.”

In 2019, far-right protests took place in Tbilisi against the premiere of Georgia’s first LGBTQ movie, “And Then We Danced.”