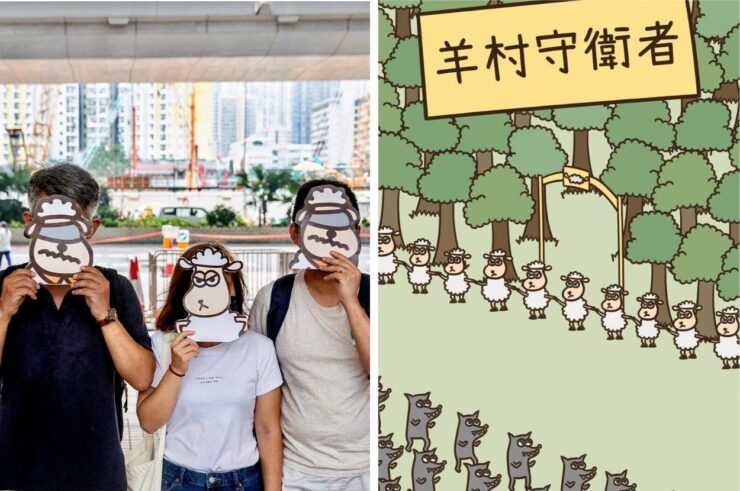 Five Hong Kong speech therapists have been found guilty of “sedition” for publishing a series of children’s books about wolves and sheep and sentenced to 19 months in prison.

The three books are about sheep who try to protect their village from wolves and reference events in Hong Kong’s recent history, including the mass pro-democracy protests in 2019.

The sheep have been compared to Hong Kong residents and the wolves to the mainland Chinese authorities.

In one story, 12 sheep are forced to flee by boat and are caught at sea, which has been interpreted to represent the 12 Hong Kong activists who tried to flee to Taiwan but were captured at sea in 2020.

In July 2021, the two men and three women – Lorie Lai, Melody Yeung, Sidney Ng, Samuel Chan and Marco Fong – aged between 25 and 28, were arrested by Hong Kong police and accused of “inciting hatred of the government in children.”

They were found guilty of “sedition” on Wednesday Sep. 7, with prosecutors arguing that the books contained “anti-China sentiment” and were trying to “incite readers’ hatred of mainland authorities.”

In one story, 12 sheep are forced to flee by boat and are caught at sea, which has been interpreted to represent the 12 Hong Kong activists who tried to flee to Taiwan but were captured at sea in 2020.

The colonial-era charge of “sedition” has not been used since the mid-1960s, according to the Reuters.

“The seditious intention stems not merely from the words, but from the words with the proscribed effects intended to result in the mind of children,” the judge wrote in his judgement.

He said that the books would lead young readers to believe that mainland Chinese authorities were coming to Hong Kong with “wicked intentions” and ruining the lives of Hong Kongers, according to the BBC.

During the sentencing on Saturday Sep. 10, Yeung told the court that she had no regrets and hopes to always stand by the sheep, DW reported.

“My only regret is I couldn’t publish more picture books before getting arrested,” she said.

“In today’s Hong Kong, you can go to jail for publishing children’s books with drawings of wolves and sheep. These ‘sedition’ convictions are an absurd example of the disintegration of human rights in the city,” Amnesty International said.

“Writing books for children is not a crime, and attempting to educate children about recent events in Hong Kong’s history does not constitute an attempt to incite rebellion,” it said, calling for the five’s release.