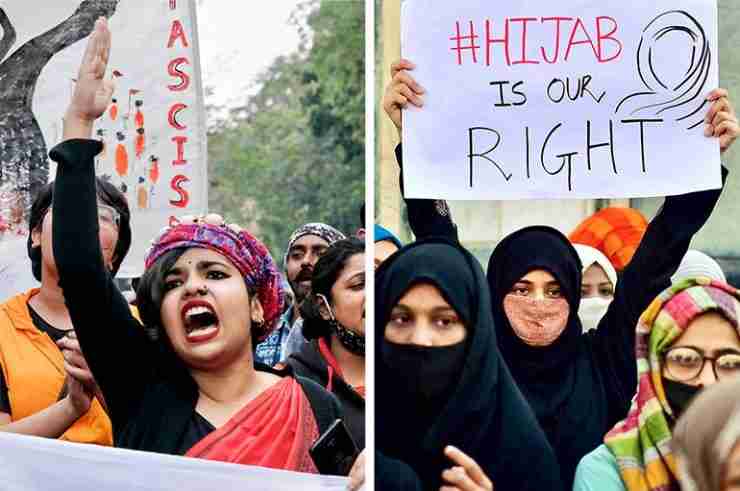 Protests have broken out across India’s southern state of Karnataka after prime minister Narendra Modi’s party banned students from wearing religious garments in schools on Feb. 5.

The demonstrations first began with a group of 28 Muslim girls who protested outside their school in the city of Udupi after they were denied entry in the classroom and marked absent for the day for wearing a hijab.

The ban caused outrage among the Muslim community and triggered protests, with supporters of Hindu nationalism staging counter-protests in support of the ban.

Muslims, who make up about 13% of India’s 1.35 billion population, say the ban is another move to further marginalize them in the majority Hindu country since Modi took power in 2014 on a platform of “good governance and a strong Hindu identity,” according to Reuters.

The BJP, meanwhile, has blamed Muslims for “seeking a different identity by insisting on wearing a hijab,” Reuters reported.

“[Muslims] look at every issue as a victim,” the BJP’s spokesperson in Karnataka said. “If they take a stand, the Hindu community will also take a stand. Our young girls and boys will be disturbed (thinking) why are they being given a special privilege?”

Amid the unrest, Musakaan Khan, a 19-year-old student, has become the symbol of resistance for young Indian Muslim women.

In a video that went viral, Khan arriving to school in a hijab and black robe was accosted by a group of men wearing saffron scarves and shouting Hindu slogans.

The men demanded she take off her head covering, but Khan stood her ground and shouted “Allah Akbar” (God is Great) in return, the BBC reported.

“All that I want is to stand by my rights and education,” she told the BBC from her home in the city of Mandya, adding that she was “not differentiating between Hindus and Muslims,” and has “no problems with what they wear.”

The girls have petitioned the court to overturn the ban for violating their right to practice their religion and access education, and a hearing is underway at the High Court of Karnataka.

Activists say moves to marginalize the Muslim minorities have increased since Modi and the BJP came to power.

“We have been wearing hijab for years without any problem but now, the issue has been suddenly taken up by the BJP and Hindutva groups to rake up communal tensions”, Kaneez Fathima, a member of the state legislative assembly, told Al Jazeera.