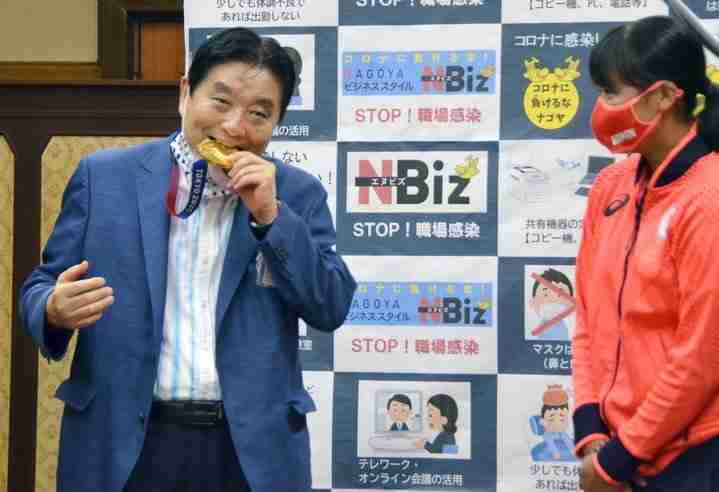 The mayor of Japanese city Nagoya has apologized after being heavily criticized for grabbing a softball player’s Olympic gold medal and biting on it during a public ceremony.

The incident happened when Takashi Kawamura met with Miu Goto, a 20-year-old pitcher from Nagoya, on Wednesday Aug. 4 following the Japanese team’s win over the United States at the Tokyo Olympics.

After Goto put the medal on him, 72-year-old Kawamura said, “it’s heavy” before suddenly taking off his mask and then putting the medal in his mouth.

A photo of him chomping on the medal at a ceremony went viral and sparked backlash on social media, with the public and other athletes criticizing Kawamura’s behavior as disrespectful.

“I myself have been careful not to scratch my gold medal,” Judoka Naohisa Takato, who won gold at the Tokyo Olympics, tweeted, Nikkei Asia reported. “Goto has too big a heart. I would’ve cried.”

Speedskater Nao Kodaira, who won gold at the 2018 Pyeongchang Winter Olympics, tweeted he would have cried and “wouldn’t be able to recover for a while,” according to the New York Times.

Kawamura’s behavior was also criticized by Toyota, which owns the club team Goto plays for, which said in a statement that it was “an unworthy act and lacked respect.”

Other posts on Twitter said it was unhygienic during the COVID-19 pandemic and that Kawamura had turned Goto’s gold medal into a “germ” medal since the pronunciation is the same in Japanese, according to Reuters.

The Nagoya city hall received more than 4,000 complaints, according to Nikkei Asia.

Kawamura apologized shortly after, saying, “I saw the gold medal that I had admired and acted on impulse.”

“I forgot my position as Nagoya mayor and acted in an extremely inappropriate way,” he said. “I am fully aware that I should reflect on that.”