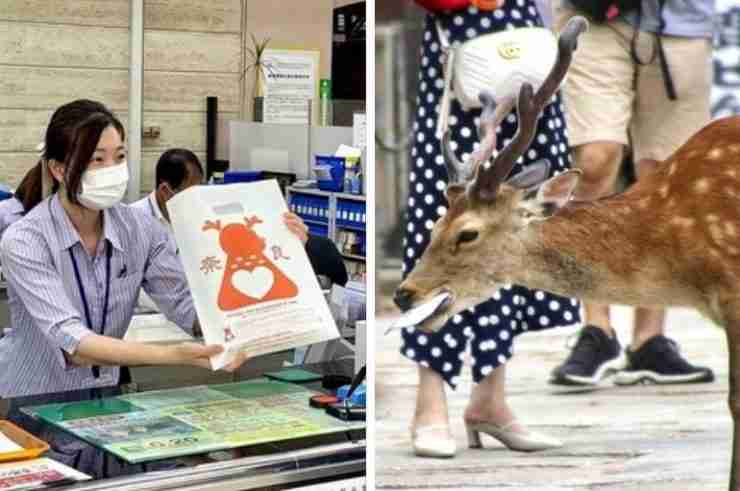 Some residents in Japan’s Nara have invented digestible, “deer-friendly” bags to help stop deer in Nara Park from eating plastic bags and food wrappers left behind from tourists.

Last year, nine deer in Nara Park died after consuming plastic waste, with one reportedly having more than 9lbs (4kg) of rubbish in its stomach.

The paper bags, created by residents Hidetoshi Matsukawa, Takashi Nakamura and Kiyoshi Ogawa, are made from “shika gami” or deer paper, which comprises of the pulp of recycled old milk cartons and the same rice bran used for the crackers typically fed to the deer, that the animals can digest without harming their bodies.

The “deer-friendly” bags have been tested and approved to be safe for consumption by the deer by Japan Food Research. They are currently being sold by several Nara companies, including the Nara City Tourism Association, at around 100 yen ($0.95) per bag.

There are more than 1,000 deer at Nara, which is a popular tourist destination. A spokesperson for the preservation foundation told Japan’s Kyodo News Agency last year that tourists often discard food wrappers and plastic bags on the island, which the deer then mistakenly consume as food.

The spokesperson said that the nine deer were very skinny and may have died as a result of malnutrition from the indigestible plastic filling up the space in their stomachs. Park visitors can feed the deer special sugar-free snacks without any plastic packaging sold at nearby shops.