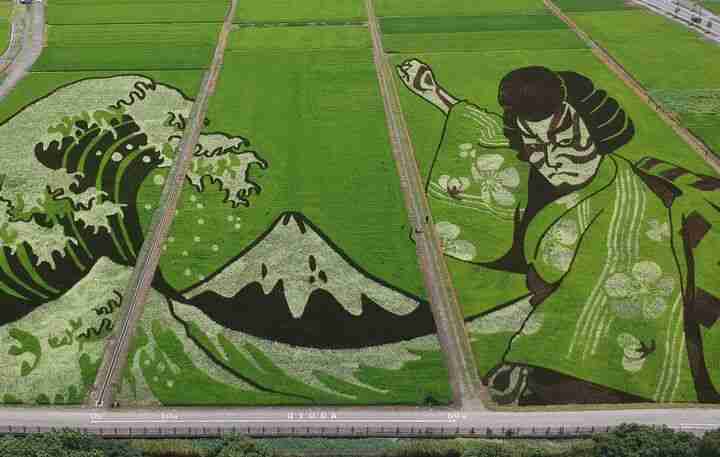 In Gyoda, Japan, locals have turned one of the city’s rice paddies into a gigantic artistic canvas.

The city, which is located in Saitama Prefecture, is mostly flat, with rice paddies all across town.

Each year, people in Gyoda have been planting different strains of rice in patterns during spring so that they will eventually grow into a variety of colors and reveal the picture.

Japanese people have named this type of art “tambo art”.

The tambo art’s theme changes yearly, with the theme in 2016, for example, being Dragon Quest from the game app, and the theme for 2019 being the Rugby World Cup.

This year, the rice paddy art featured iconic Japanese images of the famous wave and Mount Fuji of Katsushika Hokusai’s woodblock print and a Kabuki actor in enchanting face paint, similar to the ones featured at the Tokyo 2020 Olympic opening ceremony.

Tambo art begun in Gyoda in 2008, when 433 locals participated in the rice planting event. The city holds the Guiness World Record for the World’s Largest Rice Paddy Art.