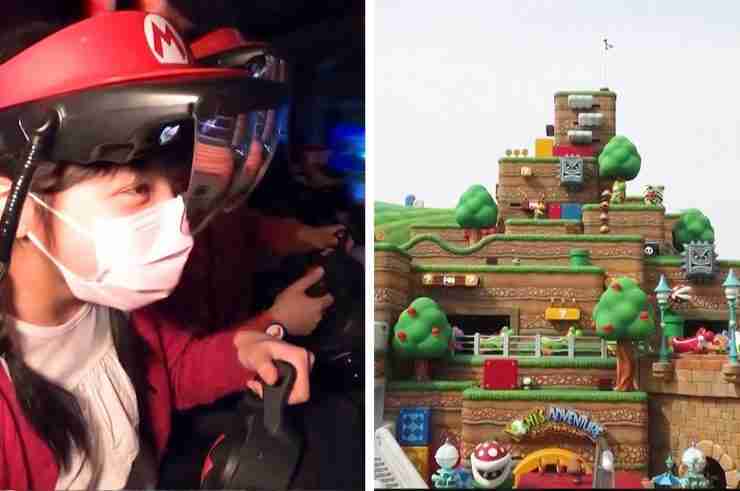 Visitor enter the theme park through a giant Warp Pipe and are greeted by chomping piranha plants, punchable coin blocks and the Mount Beanpole.

The Mario Kart ride is one of the main draws, using augmented reality technology to bring the race game into real life. The ride takes place at the castle of Mario’s enemy, Bowser, and players are able to collect and shoot items at opponents. Life-size characters from the Mushroom Kingdom adorn every corner of the park.

For children, there’s a chiller ride, “Yoshi’s Adventure.” Visitors can purchase a “Power Up Band” for 3,200 yen (US$30) to pair with an app that tracks their progress and rank throughout the park.

“You can become Mario,” a theme park official told told reporters at a press preview. “In order to achieve that, as you would notice when you enter the park, we created a world as perfect as the one in the game.”

It is one of the world’s first theme parks based on a video game franchise. Super Nintendo theme parks are also planned at Universal Studios parks in Orlando, Florida, Hollywood, and Singapore.

The opening of the new attraction was postponed several times since last summer due to the pandemic. As COVID cases have been surging in Japan, the theme park has been temporarily closed since April after it was finally launched for only about a month.