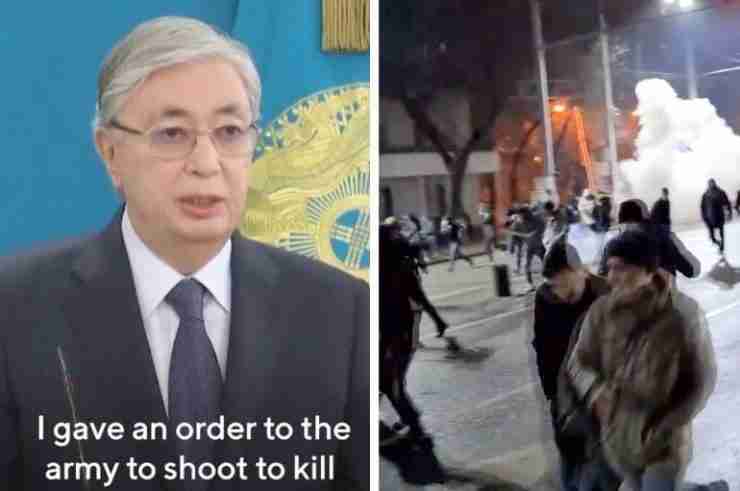 The protests first erupted on Jan. 2 in the oil-producing city of Zhanaozen over the rising prices of fuel but soon evolved into wider demonstrations against economic inequality and the autocratic government, which has ruled the country without any substantial opposition since its independence in 1991.

Protesters demanding lower gas prices and the government’s resignation took to the streets, further fueled by discontent against former President Nursultan Nazarbayev, who led Kazakhstan for three decades and is still considered by some as an unofficial leader.

Security forces used stun grenades and tear gas to try to disperse protesters, while the government shut down the internet.

After agreeing to lower the price of gas on Jan. 4, president Kassym-Jomart Tokayev said on Jan. 5 said he had accepted the cabinet’s resignation and that Nazarbayev had resigned as the Chairman of the Security Council of Kazakhstan, a role Tokayev then assumed.

However, this failed to quell protesters, and demonstrations continued, becoming the worst unrest the country has seen since its independence.

Protesters, who were demanding regional leaders be directly elected rather than appointed by the president, stormed government buildings in Almaty, Kazakhstan’s biggest city, and set them on fire.

Tokayev declared a nationwide state of emergency and requested assistance from the Collective Security Treaty Organization, a Russian version of NATO, which saw Russia, Armenia, Belarus,Kyrgyzstan and Tajikistan send in troops.

On Jan. 7, Tokayev said that constitutional order had been largely restored in the country. Calling protesters “bandits” and “terrorists”, he also announced he had ordered security forces to “shoot to kill” protesters without warning and thanked Russia for sending troops to establish order.

On Jan. 10, the internet was restored across the country as the government declared a day of mourning for the victims.

On Tuesday Jan. 11, Tokayev said ordered had now been fully restored and said the protests were “over.”

He said that the CSTO had completed its mission and would begin withdrawing on Jan. 13 and complete its withdrawal within 10 days.