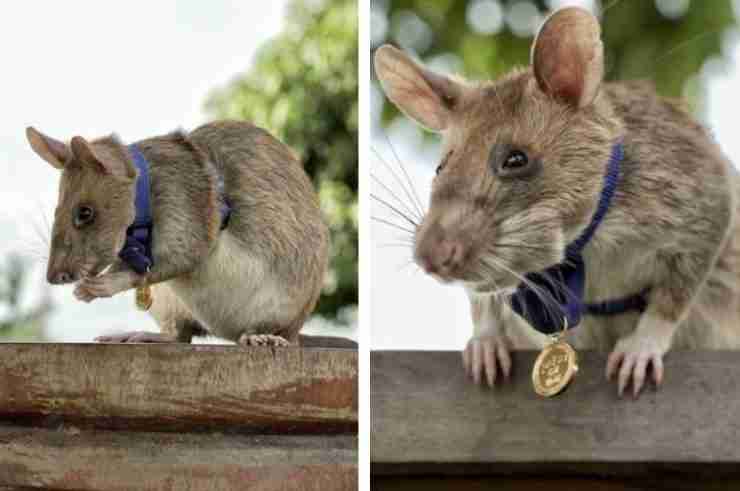 Meet Magawa, a heroic rat that was awarded a gold medal for detecting mines in Cambodia and saving lives.

During this time, the African giant pouched rat has sniffed out 71 mines and 38 explosive items over more than 225,000 square metres of land, making him the most successful rodent trained by the APOPO, a Belgian non-profit that trains animals to save lives by detecting mines.

“He’s a phenomenon,” Michael Heiman, Cambodia Program Manager of APOPO, told Almost. “He is fast, he is focused and he’s one of the first.”

Magawa joined APOPO in 2016 from Tanzania and established a strong bond with his handler So Malen right away.

So said one of her fondest memories with Magawa as the first time they worked together on the field.

“When Magawa found a mine, it made me realize that that he is a very smart rat as he could start working as soon as he arrived on the field,” she said.

Last September, Magawa was awarded a gold medal by UK charity People’s Dispensary for Sick Animals (PDSA) to recognize his bravery and heroism.

“Not only is his work life saving, it’s life changing,” Jan McLoughlin, Director General of PDSA said. “His work enables huge areas of land to be cleared and to be walked on safely.”

However, when it came to awarding Magawa with the medal, things turned out to be trickier than they thought.

“When you put the medal on, he starts eating it,” he said, adding that the photos of Magawa with the medal were probably “one out of a thousand.”

Earlier this year, APOPO announced that Magawa was retiring as he was slowing down and the organization needs to respect his needs.

“I will miss Magawa once he leaves,” So said. “I worked hard with Magawa every day so when Magawa retires, I will miss him very much.”

But first, Magawa will stay on for a few more weeks to mentor a group of 20 newly trained landmine detection rats before he may return to Tanzania.