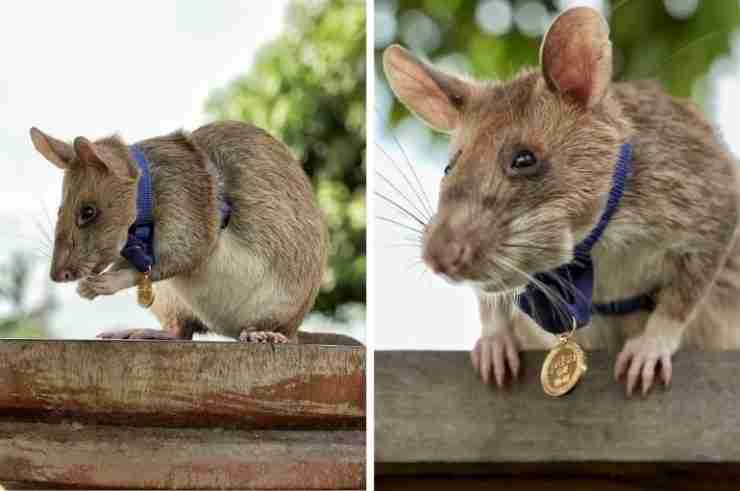 Magawa, a rat that was awarded a gold medal for his job detecting mines in Cambodia, has died at age eight.

“Magawa was in good health and spent most of last week playing with his usual enthusiasm,” APOPO, the Belgian non-profit he worked for, said in a statement on Tuesday Jan. 11. “But towards the weekend he started to slow down, napping more and showing less interest in food in his last days.”

He had retired after a five-year career in June last year.

During his career, the African giant pouched rat sniffed out 71 mines and 38 explosive items over more than 225,000 square metres of land, making him the most successful rodent trained by APOPO, which trains animals to save lives by detecting mines.

“He’s a phenomenon,” Michael Heiman, Cambodia Program Manager of APOPO, told Almost in an interview in June. “He is fast, he is focused and he’s one of the best.”

Born in Tanzania in 2013, Magawa learned how to find explosives through APOPO’s training program before moving to Siem Reap in Cambodia in 2016, where he began his career.

He had recently celebrated his birthday in November, reaching the “grand old age of 8,” according to APOPO.

“When Magawa found a mine [for the first time], it made me realize that he is a very smart rat as he could start working as soon as he arrived on the field,” his handler, So Malen, told Almost.

In September 2020, he was awarded a gold medal by UK charity People’s Dispensary for Sick Animals to recognize his bravery and heroism.

“Not only is his work life-saving, it’s life-changing,” Jan McLoughlin, Director General of PDSA said. “His work enables huge areas of land to be cleared and to be walked on safely.”

Prior to his retirement, Magawa stayed on for a few more weeks to mentor a group of 20 newly trained landmine detection rats.

“All of us at APOPO are feeling the loss of Magawa and we are grateful for the incredible work he’s done,” the charity said. “Every discovery he made reduced the risk of injury or death for the people of Cambodia.”