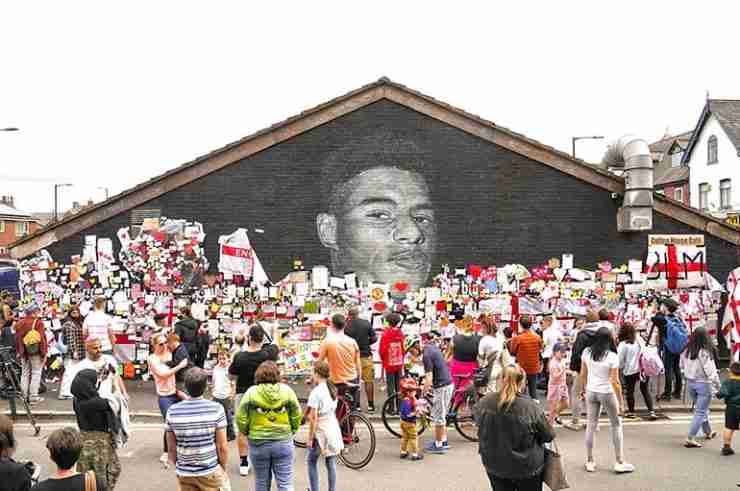 A mural of England soccer player Marcus Rashford in Manchester that was defaced with racist graffiti in the aftermath of the team’s loss to Italy at the Euro 2020 finals has been covered in hundreds of messages of support, solidarity and love.

Police were called to the mural in Withington, where 23-year-old Rashford grew up, early on Monday after receiving reports it had been vandalized with racist messages after the player missed a penalty shot during the final on Sunday July 11.

Rashford, along with Jadon Sancho and Bukayo Saka, failed to score the penalty kick at the match, which made the three Black players targets of racist abuse on social media.

As news of the vandalism spread, people rushed to the mural, flooding it with notes of love and support, stuck over the black pieces of paper temporarily taped over the racist messages.

“Son of Manchester”, ” “You are a hero for every young person”, “Proud of you”, some messages read.

Local street artist Akse P18, who created the mural, also showed up to repair the mural.

At 6pm, hundreds of people gathered in front of the mural and took a knee against racism.

“The messages I received today have been positively overwhelming and seeing the response in Withington had me on the verge of tears,” Rashford said on Twitter.

“The communities that always wrapped their arms around me continue to lift me up,” he said. “I am Marcus Rashford, 23 year old, black man from Withington and Wythenshawe, South Manchester. If I have nothing else I have that.”

The mural was painted in Nov. 2020 to recognize Rashford’s work to end child food poverty.

It includes a quote from his mother: “Take pride in knowing that your struggle will play the biggest role in your purpose.”

Last year during lockdown in the UK, Rashford introduced a campaign to provide food to more than two million children.

Greater Manchester Police said it has launched an investigation into the racially aggravated damage of the mural.