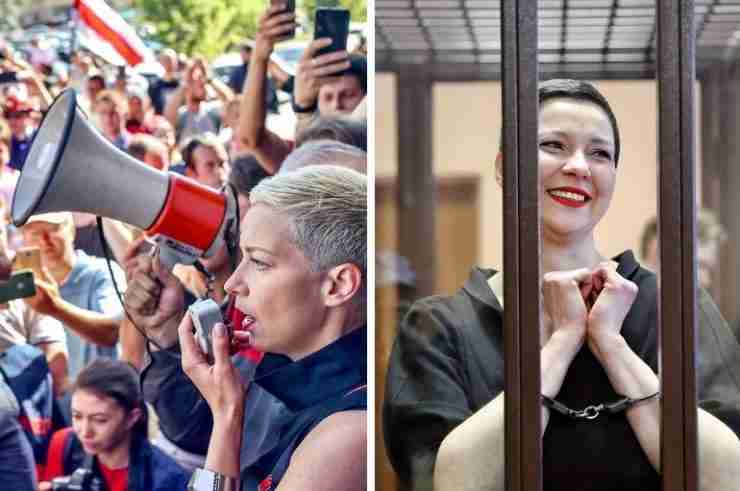 Maria Kalesnikava, a prominent Belarusian opposition leader who organized demonstrations against President Alexander Lukashenko, has been sentenced to 11 years in prison.

In a closed trial, Kalesnikava and her lawyer Maksim Znak, another opposition activist, were charged with extremism and conspiring to “seize state power in an unconstitutional way” that threatens national security on Monday Sep. 5.

Kalesnikava was a campaign manager for Viktor Babaryko, a presidential hopeful who was imprisoned before the election last August.

After the incident, Kalesnikava, along with another two women activists, Veronika Tsepkalo and Svetlana Tikhonovskaya, campaigned across the country to protest against President Alexander Lukashenko’s 27-year rule.

Tsepkalo and Tikhonovskaya, the wife of a jailed candidate, fled Belarus in August 2020, while Kalesnikava insisted on staying and was detained the next month.

Photos on social media showed that a crowd had gathered in front of the court on Monday in support of Kolesnikova.

“Live is stronger than fear!” a tweet shared on Kalesnikava’s official Twitter, read, along with a video of her smiling and making a heart gesture in a cage at the ruling.

“We demand the immediate release of Maria & Maksim, who aren’t guilty of anything. It’s terror against Belarusians who dare to stand up to the regime. We won’t stop until everybody is free in Belarus,” Tikhonovskaya said on Twitter.

“The regime wants us to see them crushed & exhausted. But look – they are smiling & dancing. They know – we will release them much earlier than these 11 years. Their terms shouldn’t frighten us – Maksim and Maria wouldn’t want this,” Tikhonovskaya added.

Since his re-election last August, Lukashenko has been cracking down on dissent, leading numerous activists to flee the country.

Riot police have responded to mass protests demanding his resignation by beating and detaining protesters, who say the contested election last year was rigged in order to extend Lukashenko’s rule since 1994.

More than 33,000 people have been detained, and more than 1,800 criminal cases were opened against activists, according to human rights group Viasna.

In May, Lukashenko ordered a fighter jet to intercept a passenger plane carrying prominent opposition journalist Roman Protasevich and force it to land in Minsk, where authorities then arrested Protasevich, sparking international outrage.

Authorities have released video of Protasevich showing him confessing to organizing anti-government protests and praising Lukashenko, footage that Protasevich’s family and allies say was obtained under duress.

In June, an opposition activist stabbed himself in the neck with a pen during a court hearing, saying investigators had pressured him to plead guilty by threatening to prosecute his family and friends.

Earlier last month, Belarusian sprinter Krystsina Tsimanouskaya, who was representing the country at the Tokyo Olympics, was taken to the airport against her wishes to go home after she complained about the country’s coaches in an Instagram video.

Tsimanouskaya has since been granted asylum in Poland and arrived in Warsaw on Thursday Aug. 5.

The same week, Vitaly Shishov, a Belarusian opposition activist, was found dead in Kiev, Ukraine, where he had been living in exile.