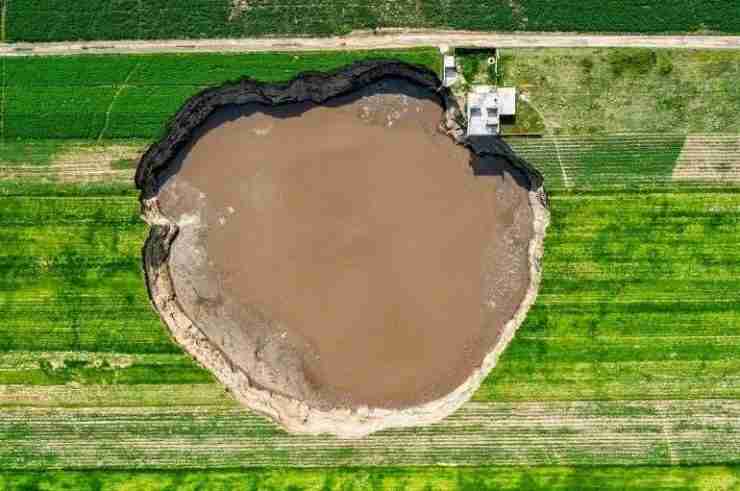 A gigantic sinkhole in central Mexico has grown so big that it has swallowed up a house and trapped two dogs.

In May, the hole appeared in a farm in Puebla, a Central Mexican state, and has slowly been growing closer towards a house nearby. A family of four evacuated before the house started to tottering on the edge and collapsed on Friday evening.

“We heard something like a rumbling,” Magdalena Xalamihua, the landlady of the house, told El País. “We thought it was fireworks, but we looked outside and saw the earth moving and water coming up, like waves. We ran.”

Two dogs, Spay and Spike, had been playing in the area and accidentally fell into the hole. Due to the loose soil, officials had previously said it would be too dangerous to rescue the dogs.

But on Thursday, a firefighter descended into the hole and managed to save them. The growing sinkhole has reached 400 feet (121 meters) in length and is 150 feet (45 meters) deep, 10 times bigger than when it first appeared.

Some locals believe the cause may have been excessive groundwater extraction, but the national civil defense office said experts believe the sinkhole most likely appeared due to an underground river’s subterranean water flows.

The municipality government has promised to compensate for the residents’ loss by granting them a piece of land and pay for the construction of a house.

However, it has yet to announce an emergency plan to stop the deterioration