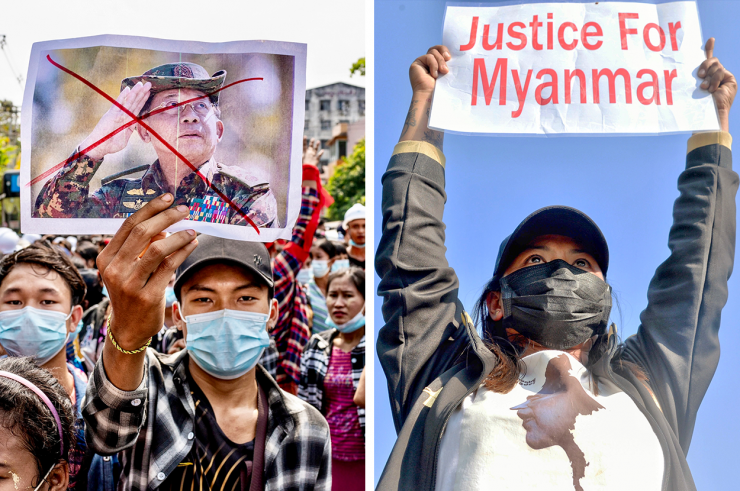 Tens of thousands of people have taken to the streets across Myanmar for three consecutive days in some of the largest protests the country has seen in more than a decade.

Protesters marched against the military taking power in a coup on Feb. 1 and demanded the release of the country’s leader Aung San Suu Kyi.

The military has accused Suu Kyi’s National League of Democracy (NLD) party of fraud in Myanmar’s election in November, placing her and senior leaders of her party under house arrest before declaring a year-long state of emergency.

On Saturday, it shut off the internet and blocked access to social media as protesters held demonstrations in several cities across the country, chanting “we don’t want military dictatorship. We want democracy” and holding up the three-finger salute, a gesture first adopted by protesters in Thailand as a symbol of resistance and democracy.

On Monday Feb. 8, as the internet was restored, police turned water cannons on protesters in the capital, Naypyidaw.

The military leader, Senior Gen. Min Aung Hlaing, also made his first public address since the coup, defending the takeover and repeating the claim that November’s election results were fraudulent, according to Reuters.

In the televised address, he promised to hold a new election and hand power to the winner, although he did not say when the election would be.

The military has also reportedly imposed curfews and restrictions on gatherings in some cities.