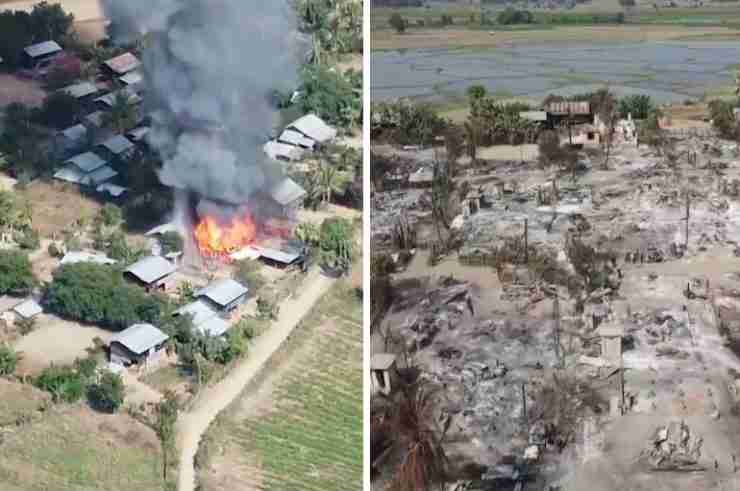 The Myanmar military has been setting fire to hundreds villages in the north of the country to crush the resistance, according to local reports.

Since the start of the year, the military has burned more than 100 villages and destroyed more than 5,500 civilian building in an attempt to suppress opposition to last year’s coup, according to a local activist group, Reuters reported.

In the latest spree, the buildings in the villages of Kinn, Upper Kinn and Ke Taung were burned over three days starting on May 26.

The northern Saigon region, where the villages are located, has been a common fighting ground between junta groups and “People’s Defence Force” (PDF) members.

“Over 200 houses were burned down… my house was totally burned down, only the concrete foundation is left,” an anonymous resident told the Guardian.

Drone video footage, which has not been verified yet, showed columns of smoke coming from villages, while satellite images showed villages on fire during the three-day period.

Local media and residents have also reported soldiers raiding houses and burning down boats, which were used to transport people and food.

The Myanmar junta has denied setting the villages on fires and accused PDF members, which it calls “terrorists”, of committing the arson attack.

Residents told Reuters in April that military attacks and arson have led to large-scale displacement. The United Nations said that more than 52,000 people fled their homes in the last week of February alone.

Meanwhile, the junta chief, Min Aung Hlaing, has said measures had been put in place to prevent civilian casualties during the military’s counterattack of “terrorist acts”.