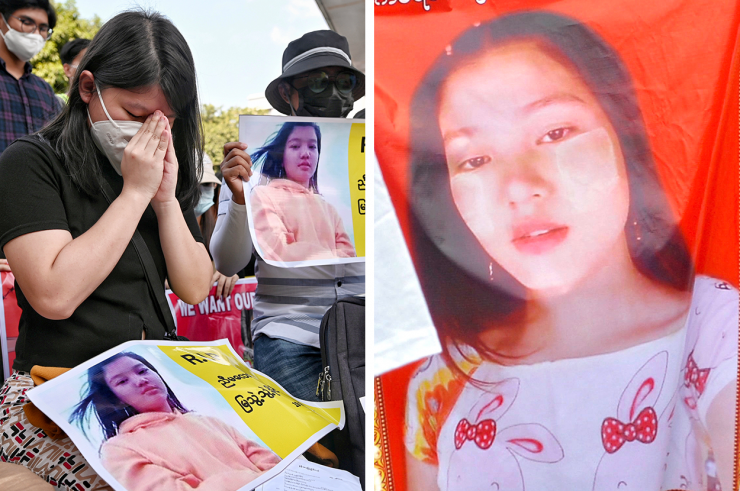 Thousands of people gathered in Myanmar’s capital Nay Pyi Taw to attend the funeral of 19-year-old woman, Mya Thwe Thwe Khaing, the first person to be killed in the anti-coup demonstrations.

Khaing, a supermarket worker, was shot in the head during an anti-coup protest on Tuesday Feb. 9, two weeks before her 20th birthday. Video of the incident showed protesters taking cover from water cannons and Khaing suddenly falling over from a bullet that penetrated her motorcycle helmet. She had been in critical condition since the protest. The hospital later confirmed her death at 11:00 local time on Friday Feb. 19.

Protesters took to the street signs and banners with images of Mya Thwe Thwe Khaing moments after she was shot in resistance to the coup. Her death was the first of at least two others who have been killed in the demonstrations that took over the country. Police were seen using live ammunition in Mandalay, the country’s second-largest city. Reports say protesters who used projectiles at police were responded with fire and tear gas.

Her funeral procession was accompanied by hundreds of motorbikes. Thousands went on the streets to honor her, making three-fingered salutes, a gesture that symbolizes resistance and democracy.

Myanmar has seen mass demonstrations against the military coup since its country’s elected leader, Aung San Suu Kyi, and members of her party were detained on Feb. 1 by the military. The military allege the landslide election victory was fraudulent, promising to hold a new election without specifying when.