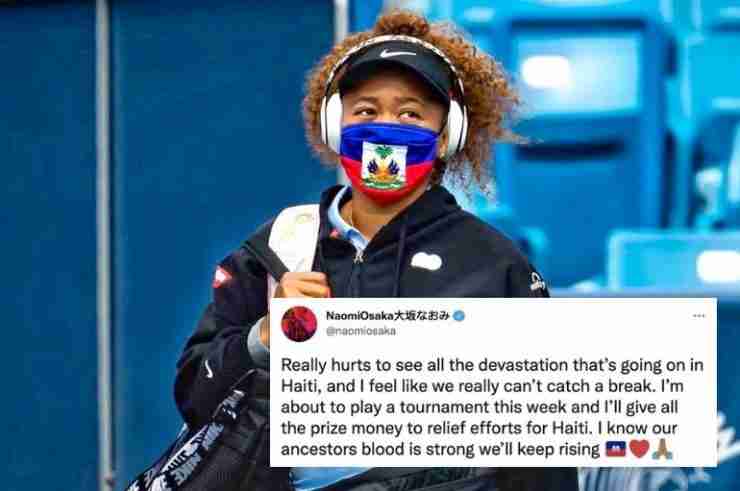 Haitian-Japanese tennis star Naomi Osaka announced she will be donating all her prize money from the Western & Southern Open to Haiti earthquake relief efforts.

“Really hurts to see all the devastation that’s going on in Haiti,” Osaka, who was born in Japan to a Haitian father and Japanese mother, wrote on Twitter.

“I’m about to play a tournament this week and I’ll give all the prize money to relief efforts for Haiti. I know our ancestors blood is strong we’ll keep rising,” the World No. 2 added.

Since the earthquake, hospitals in Haiti have become completely overwhelmed, and authorities are rushing to bring doctors into the region.

Authorities said that around 13,000 houses were damaged, and an unknown number of people remain missing.

“The most important thing is to recover as many survivors as possible under the rubble,” he said.

The US Geological Survey said the magnitude 7.2 quake was more powerful than a 7.0 earthquake that hit the country in 2010 and killed some 300,000 people.

The country is still reeling from the effects of the 2010 quake, which leveled much of the capital, Port-au-Prince, as well as the assassination of its president, Jovenel Moïse, last month.

The Western & Southern Open will be Osaka’s first tennis tournament since the Tokyo Olympics, where she lit the Olympic cauldron. She lost in the third round.

Before the Tokyo Olympics, she withdrew from the 2021 French Open after being fined for opting to skip the mandatory post-match press conference in order to take a break for her mental health.