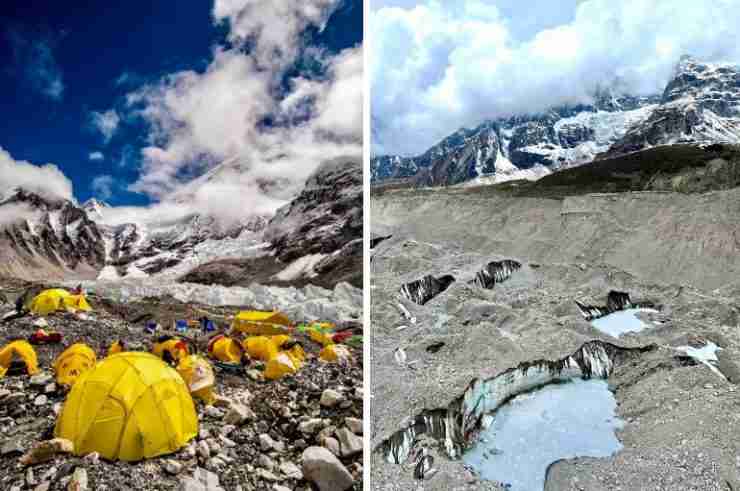 Nepal is preparing to Mount Everest’s base camp as the glacier it is currently located on is rapidly melting due to climate change, making it no longer safe.

Scientists say the Khumbu glacier is rapidly melting and thinning due to global warming, losing about 1 meter – about 9.5 million cubic metres of water – a year, according to the BBC.

The melting is leading to increased rock falls and movement of melt-water, which is destabilizing the glacier, and climbers say they are noticing more crevasses appearing at the base camp overnight when they are sleeping.

Authorities also a stream in the middle of the base camp, located at an altitude of 5,364 meters, is expanding.

“In the morning, many of us have this chilling experience that we could have fallen into them in the night. Cracks on the ground develop so often, it is quite risky,” a Nepalese army colonel leading a clean up campaign told the BBC.

Everest officials said that the growing number of people at the base camp was also contributing to the issue, with people urinating about 4,000 liters every day and burning fuels for cooking and warming, which can impact the glacier’s ice.

Everest officials told the BBC that they will find a new site 200 to 400 meters lower in altitude, where it is no year-round ice.

Authorities say the base camp is still stable currently, but they are hoping to complete the move by 2024.