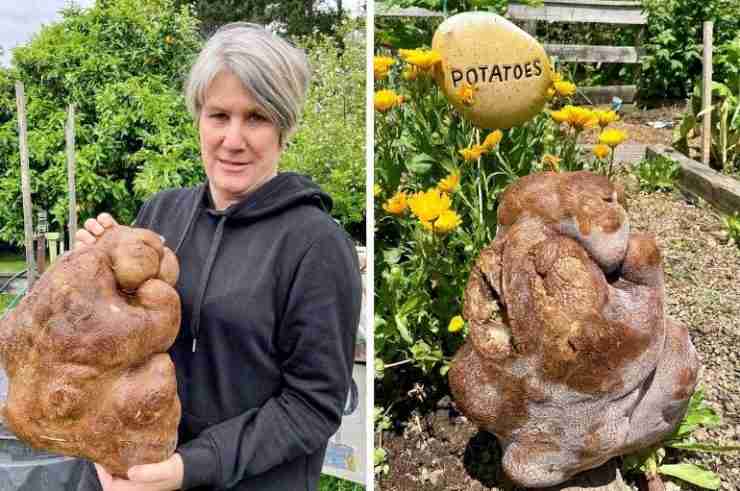 A few months ago, a couple living in Waikato, New Zealand, dug up what may have been the world’s biggest potato growing in their garden.

Well, the results are in, and according to the Guinness World Records, Dug the potato is not actually a potato but a “tuber of a gourd.”

Donna and Colin Craig-Brown had been tidying up their vegetable garden one Saturday last August when Colin hit what he thought was a sweet potato with a hoe.

The couple got on their knees and dug and dug, but still couldn’t get it out. It was only after Colin got the garden fork and “impaled the old chap” that they were able to pull out the giant spud, the couple told Almost.

“I thought, ‘what an ugly piece of vegetable this is,’” he said. “We hosed it down and had a bit of a laugh and thought ‘what the hell is going on?’”

Colin conducted a taste test, and the couple realized they had dug up a 7.9 kilogram of what they thought was a potato, which they named “Dug”.

After the story started going viral and getting some encouragement from friends and family, the couple decided to apply for a world record, but said at the time that they were not too concerned whether they get it or not.

Last week, they heard back from the Guinness World Records, which conducted a DNA test on Dug and found that it was not a potato but “the tuber of a type of gourd”, thereby disqualifying their application.

“The thing is, it was very unexpected, it was a very pleasant surprise, and we’re very casual about it,” Donna told Almost in November.

“We’re just trying to have fun with it,” Colin said. “At the end of the day, it’s still a bloody potato.”

The couple said they have received a lot of suggestions on what to do with Dug after everything is over, and most of them all suggested eating him.

“In my mind, it would be like chewing on your best friend,” Colin said.

Instead they have decided they will hold a wake for Dug, and Colin, being a boutique distiller, will make a batch of potato vodka so they can “toast Dug with Dug.”

Almost has reached out to the Craig-Browns for comment about Dug’s fate.