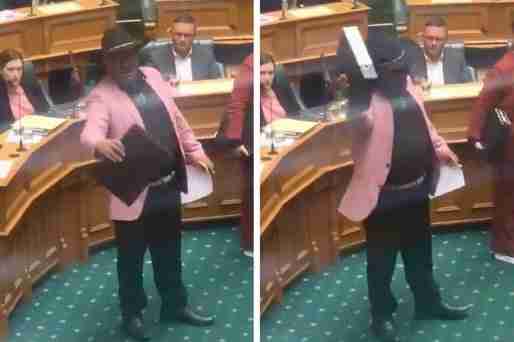 The incident happened on Wednesday May 12 while the house was discussing the government’s plans for a new Māori Health Authority, centered on fixing systemic issues and inequalities Māori people face in the country’s healthcare service.

The opposition National Party has opposed the authority, accusing Prime Minister Jacinda Ardern’s government of a “separatist agenda,” according to the Guardian.

On Wednesday, National Party leader Judith Collins asked Ardern a question that suggested the government was no longer a democracy because it was acknowledging a separate sovereignty.

“What the member characterizes as separatism, I characterize as partnership,” Ardern said in response. “And Mr. Speaker, it is unacceptable, I would hope, for any member in this House to stand by while we have a health system or systems across the board that lead to different outcomes for different people in New Zealand.”

“Our job as government is to make sure that we see opportunity and the potential of all New Zealanders realized and our current systems do not achieve that,” she added.

Waititi then said that Maori people had been facing a “constant barrage of insults” in the past two weeks as a result of the National Party’s “racist propaganda and rhetoric” and that it was bringing the House into disrepute.

The Speaker of the House, Trevor Mallard, then turned off Waititi’s microphone and asked him to sit down. However, Waititi instead performed the haka, a Maori ceremonial dance, and was ordered to leave. Maori Party co-leader Debbie Ngarewa-Packer left the chamber with him.

Speaking to media outside, Watiti said his party was “sick and tired of Māori being used as a political football” and that they won’t stand for it anymore.

He added that his party is prepared to leave the parliament again if he feels the same “racist” rhetoric from the National Party continues, according to the New Zealand Herald.

In February, Waititi was ejected from the parliament for wearing a hei-tiki, a traditional Māori pendant to the parliament, instead of a tie, which was mandatory for male politicians in New Zealand at the time. However, after the incident, the rules were changed so that ties were no longer required.