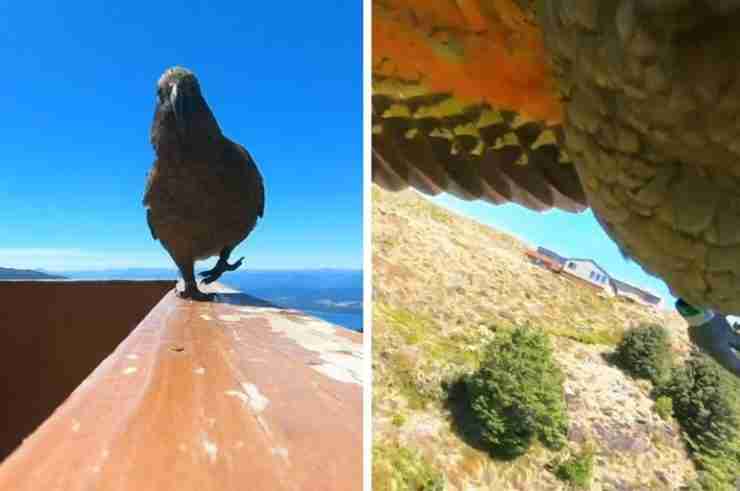 When a New Zealand family took a hiking trip to Fiordland National Park, South Island, they did not expect their GoPro to be snatched away by a native parrot known as the kea, and that it even captured an amazing shot of itself in the mischievous act.

Alexandra Verheul and her family, from Dunedin in southeast New Zealand, had been leisurely birdwatching on the porch as they were backpacking along the Kepler Track when the olive green kea took the opportunity to clutch their GoPro that was set on the railing and took flight with it.

The kea, an endangered species of alpine parrot native to the Aoteroa land, is notorious for its smart, curious and feisty nature, and often responsible for unsuspecting tourists’ missing belongings such as wallets, snacks, and even jewellery.

As the guilty kea soared through the tree-lined hill, the GoPro in its claw recorded an amazing aerial footage of its escape.

It eventually settled on the rocky ground, and seemingly decided to investigate the use of the device as the bird kept pecking at the GoPro, at a time even tearing off a chunk of plastic from the camera casing.

Remarkably, the gadget survived the ordeal and was ultimately retrieved by the family.

Thankfully, the kea flown in a straight line, so when Verheul’s young son tracked down in direction to the clamour, he was able to retrieve the just-abandoned GoPro, which had continued to film the whole process.

“I downloaded (the footage) onto my phone…it was amazing. It was totally unexpected,” Verheul said in an interview with local broadcast programme “Seven Sharp”.

This astonishing two-minute-long footage is sure to be part of the family’s video of their first trip together.