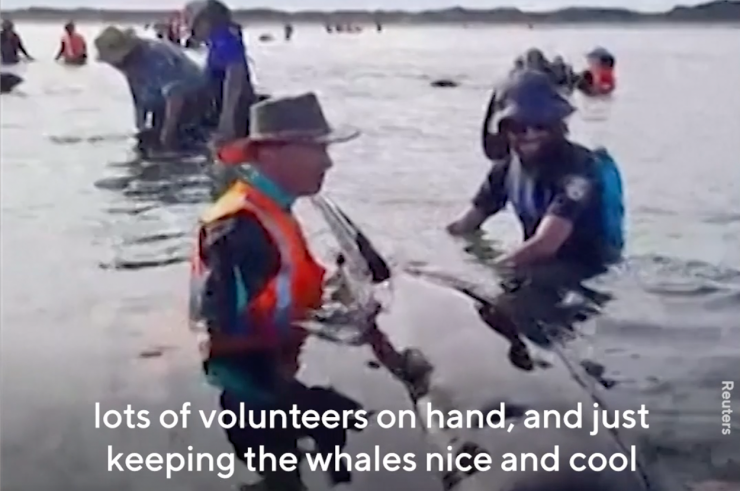 Rescuers in New Zealand have successfully managed to save 28 pilot whales that had beached on Farewell Spit, a stretch of coast in the South Island notoriously known for mass strandings.

The country’s Department of Conservation said a pod of 49 long-finned pilot whales were found on Monday Feb. 22, with nine dying by mid-afternoon.

Up to 200 people turned up to keep the whales healthy and calm, AP reported.

They worked with staff from the nonprofit whale rescue group Project Jonah and the Department of Conservation to help refloat the whales at high tide on Monday evening, forming a human chain to guide the whales into deeper water.

However, the whales beached themselves again overnight, and rescuers found that more than 17 more whales had died.

After refloating them again on Tuesday, volunteers formed a human chain to try to stop the whales from swimming back to shore.

Once the whales swum out a little further, they then used boats to form a barrier to the shore, a spokesperson told AP.

Over 10 pilot whale strandings in the past 15 years have occurred on Farewell Spit; the most recent was in February 2017, when 250 whales died out of the 700 marine animals beached. While scientists are still unsure as to why strandings are so popular at Farewell Spit, they believe it may be because the spit creates a shallow seabed in the bay that interfered with the whales’ sonar navigation systems.