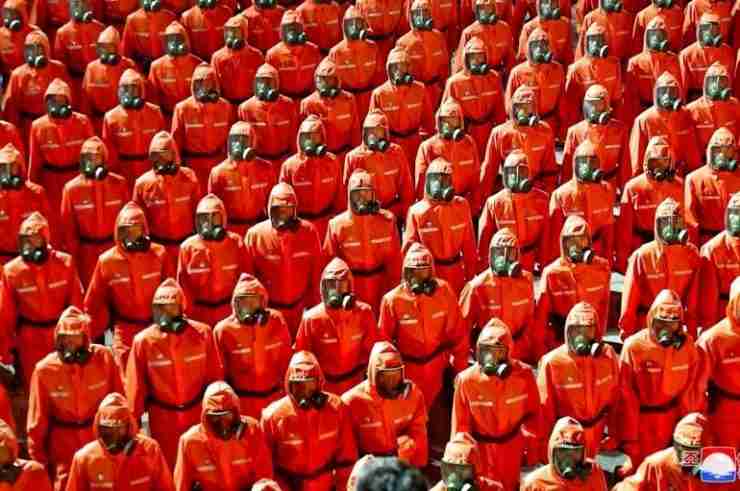 In the middle of the night on Thursday Sep. 9, North Korea celebrated the nation’s 73rd anniversary, overseen by leader Kim Jong-un. This year’s parade, however, did not include a speech from Kim, ballistic missile or a televised taped broadcast on state TV.

The Korean Central News Agency (KCNA), the state news agency, said fighter jets flew in formation above the midnight parade at Kim Il-sung Square in Pyongyang, and some conventional weapons were on display throughout the event, the Guardian reported.

The parade also included virus workers in orange hazmat suits and gas masks, which may have been aimed at symbolizing to the international community that the isolated country had created a special force to help prevent the spread of COVID-19, CBS and BBC reported.

The event also featured fire trucks, tractors, military dogs, with a parade of laborers, police officers, research units and factory and health workers down the street.

As there was no speech from Kim nor the usual display of long-range ballistic missiles, analysts say this year’s parade may have been used to boost the country’s morale rather than boasting to the international community.

Due to the pandemic, Kim severed almost all of the country’s ties with the outside world in 2020 to prevent the entry of coronavirus. To date, the country has not reported a single case of the virus, CNN reported.

However, Kim showed no ounce of defeat and worry during the night as he showed off a slimmer body and was more energetic than he has been in years.

Wearing a cream-colored suit, he waved to the crowds from the balcony with a wide smile, hugging children among the unmasked crowds. He had repeatedly apologized to his people for the economic woes caused by the pandemic.

The perceived absence of strategic weapons and a clear focus on public security showed Kim was concentrating on domestic issues such as the pandemic and the nation’s economy, Yang Moo-jin, a professor at the University of North Korean Studied in Seoul, told The Guardian.

“The parade seems to be strictly designed as a domestic festival aimed at promoting national unity and solidarity of the regime,” Yang added.

Other experts claim the leader’s weight loss is likely a result of his efforts to improve his shape and health.

“It has become crucial for Kim to build an image as a young and vigorous leader who can navigate the country out of trouble,” Park Won-gon, a professor of North Korea studies at Seoul’s Ewha Womans University, told CBS.

During the parade, Ri Il Hwan, a member of the Political Bureau and secretary of the Central Committee of the Workers’ Party of Korea, said in his speech that North Korea will increase the size of the People’s Army and will ramp up its defense industries to turn “the whole country into a fortress,” CNN reported.