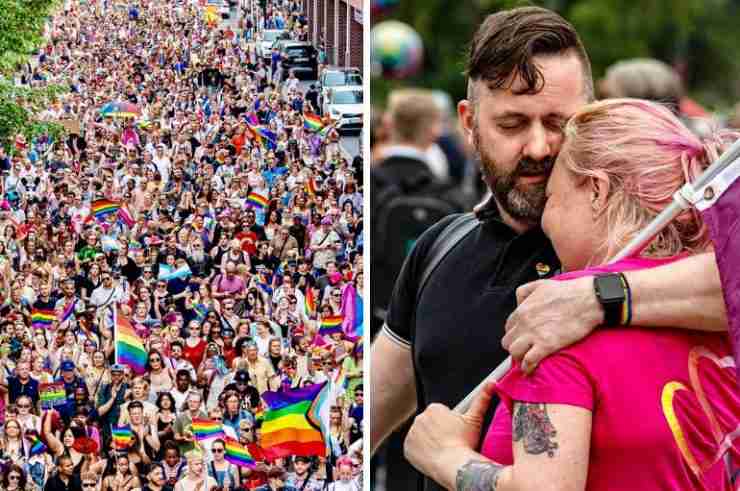 Thousands of people flooded the streets of Oslo, Norway, in a protest against hate after a gunman killed two people and wounded 21 others outside a gay bar and several entertainment venues in the city.

The impromptu demonstration came despite organizers canceling the annual Oslo Pride parade, which was returning for the first time since 2019, at the police’s recommendation following the shooting.

A 42-year-old man was arrested and charged shortly after the attack on Saturday June 25.

The man had opened fire outside three locations, including a popular gay bar, in Oslo’s nightlife district at around 1:15 am on Saturday, according to authorities.

Eyewitnesses say the suspect had taken a gun out of his bag and started firing, forcing people to run down the streets or throw themselves to the ground, the BBC reported.

Police detained the suspect with civilians’ assistance minutes later and seized two weapons at the scene, including an automatic weapon.

Ten of the people who were injured are in a critical condition, according to the BBC.

Police say they are still investigating the suspect’s motive, and the terror alert level in Norway has been raised to its highest level after the attack.

Norwegian intelligence services have called the attack “an act of Islamist extremism.”

The suspect had been known to Norwegian intelligence since 2015 over concerns he had become radicalized and was part of an unspecified Islamist network, according to The Washington Post.

He has been charged with murder, attempted murder and terrorism.

On Sunday, a special memorial service was held at Oslo Cathedral to commemorate the victims of the shooting, with political leaders and Crown Princess Mette-Marit in attendance among the mourners, who laid rainbow flags and flowers near the scene.

“This fight is not over. It is not safe from dangers. But we are going to win it, together. The shooting put an end to the Pride march, but it has not put an end to the fight to end discrimination, prejudice and hate,” Norway’s prime minister, Jonas Gahor Støre, said at the service.

Norway has a relatively low crime rate but has experienced a series of right-wing extremist attacks in recent decades, including one of the worst mass shootings in Europe, which occurred in 2011, according to NPR.