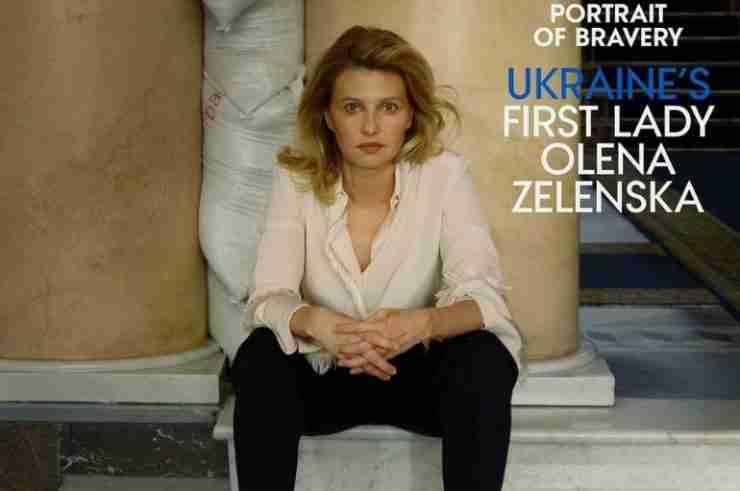 Olena Zelenska, the first lady of Ukraine, has graced a special digital cover of Vogue, speaking about her marriage, being the first lady and the toll the war has taken on her country.

Photographed by Annie Leibovitz, Zelenska is seen sitting on the steps outside the Ukrainian parliament in the capital Kyiv, staring directly into the camera.

Sandbags line the columns behind her, intended to protect the building from the destruction of Russia’s invasion.

“These have been the most horrible months of my life, and the lives of every Ukrainian,” the 44-year-old former comedy writer said in the interview. “Frankly I don’t think anyone is aware of how we have managed emotionally.”

Nothing could have prepared her for the war.

“We were living happy lives and we never thought this would happen. But we have hope,” she said.

Zelenska shared the photos from the shoot on her Instagram, writing, “To be on the Vogue cover is a great honor and dream of many successful and prominent people of the world. The only thing I wish for all of them is that it is not because of war in their countries.”

“And now I would like you to see every Ukrainian woman here, in my place. Who fights, volunteers, settles in a refugee camp, does her job under the sound of a siren, holds on under the occupation,” she wrote. “She has the right and deserves to be on the covers of the whole world. Each of you, fellow Ukrainian women, is now the face and cover of our country.”

In the interview, Zelenska said that in spite of everything, she has been inspired by fellow Ukrainians.

“We’re looking forward to victory. We have no doubt we will prevail. And this is what keeps us going,” she said.