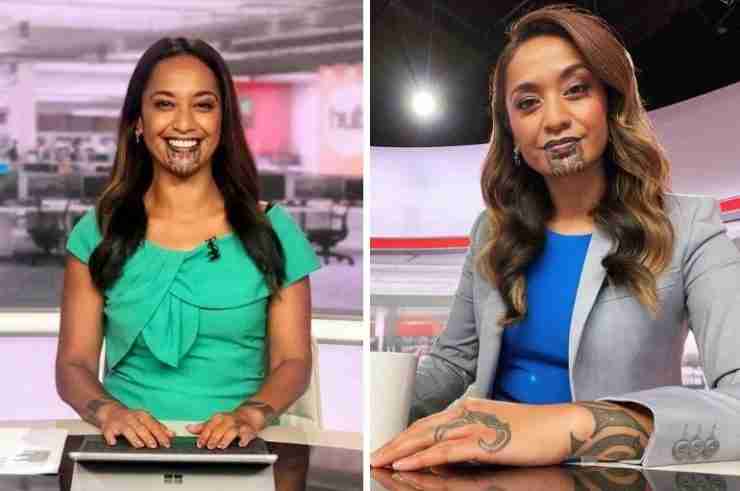 Māori journalist and translator Oriini Kaipara has made history by becoming the first person with a traditional facial tattoo to host primetime news on New Zealand’s national television.

Kaipara, 38, began her career in the news industry in 2005 and has years of experience reporting onMāori affairs.

She previously made her mark in journalism history in 2019, when she became the world’s first mainstream TV news anchor with“moko kauae”, a traditional tattoo worn onMāori women’s chins to represent her whānau (extended family) and mana (power of inherited elemental force).

To remind herself of the agency she holds as aMāori woman, the former documentary filmmaker decided to get her moko in 2017, continuing the tradition passed down by generations of indigenous people in New Zealand.

A moko kauae is a symbol of personal transformation, a rite of passage between girl and adulthood.Kaipara got hers after learning she is 100 percentMāori from a DNA test.

“When I doubt myself, and I see my reflection in the mirror, I’m not just looking at myself,” she told CNN. “I’m looking at my grandmother and my mother, and my daughters, and hers to come after me, as well as all the other women, Māori girls out there and it empowers me.”

Although already a permanent anchor on national TV, Kaipara said hosting the primetime program was the “pinnacle” of her career dreams.

However, it was also a “bittersweet moment” for her since her late mother wasn’t able to share the moment with her, she said.

Kaipara is also committed to preserving theMāori language and encouraging people to speak it by incorporatingMāori phrases in her presenting despite facing backlash.

“I look forward to leading effective and positive change where Māori issues and interests are respectfully conveyed and relayed on our platforms – where our voices and stories are told fairly, accurately, and objectively. I do not take this challenge lightly and trust that the mana of my people remains with me as I take on this new journey for all of us,” Kaipara told NZ Herald.

Kapara, who is of Ngāti Awa, Ngāti Tūwharetoa, Ngāti Rangitihi and Ngāi Tūhoe descent, says she hopes Māori girls from young generations draw inspiration from her story and embrace their own culture.