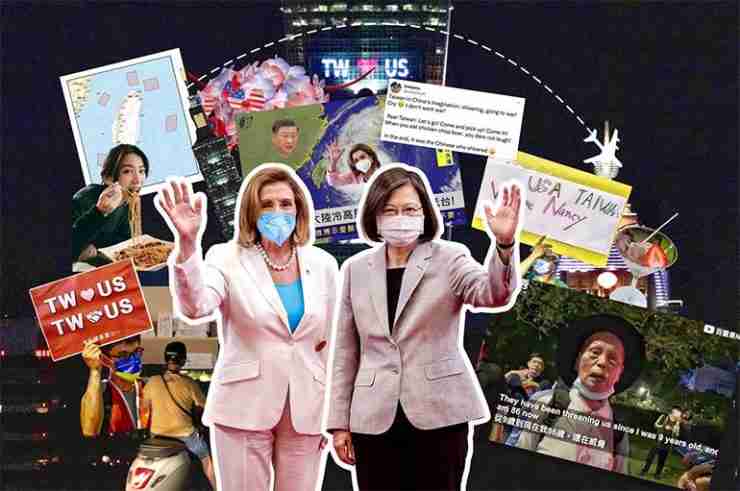 US house speaker Nancy Pelosi has met with Taiwan’s president Tsai Ing-wen after arriving in the country in a historic visit on Tuesday Aug. 2.

The visit makes her the most senior US politician to visit Taiwan in more than 20 years.

The controversial visit comes amid rising cross-strait relations between Taiwan and China, which claims Taiwan as its terroritory.

Reuters’ Twitter live stream of her arrival at Songshan Airport in Taipei on Tuesday night gained more than 1.3 million views.

Tens of thousands of people tuned in to track her flight.

According to flight tracking website Plane Finder, Pelosi’s flight was the No. 1 tracked flight across their platforms.

The level of interest in her visit even caused some technical difficulties on FlightRadar, another flight tracking platform, due to the high user traffic.

Meanwhile, on the ground, the iconic Taipei 101 landmark was lit up with a welcome message highlighting the relationship between the Taiwan and the US.

Hundreds of people gathered at Songshan Airport in Taipei to welcome the speaker.

“Taiwan in China’s imagination: *Shivers in fear* We’re going to war! Sob 🥹 We don’t want to go war.
Taiwan IRL: Let’s go! Pick her up at the airport! Leggo! Eat some fried chicken cutlet and have some beer while laughing at how you [China] are afraid to do anything.
Turns out China’s the one shivering in fear 🤪”

Both supporters and protesters concerned about what her visit meant for the safety for the country gathered outside the Grand Hyatt, where she was staying.

Her visit caused such a furor that Chinese social media users began speculating the hotel was haunted.

Even celebrities got dragged in the Pelosi drama, with some Chinese social media users accusing Taiwanese-born singer, Hebe Tien, of being pro-Pelosi’s visit because she was pictured eating pasta.

In a Washington Post op-ed published shortly after, she also spoke out against the Chinese Communist Party’s crackdown against human rights in Hong Kong, Tibet and Xinjiang, saying that “we cannot stand by as the CCP proceeds to threaten Taiwan – and democracy itself.”

After her arrival, the Chinese government announced “military operations” including missile tests and live fire exercises around Taiwan, which were slated to begin on Wednesday night after Pelosi’s departure.

It had already strongly condemned the visit, saying that there would be “serious consequences.”

Despite the threat, the Taiwan Alerts Facebook assured citizens that work and classes would continue as usual the next day, to the disappointment of many students.

“Alert: US Speaker Nancy Pelosi has been confirmed to arrive in Taiwan tonight. Work and classes will continue as normal tomorrow (8/3),” the post read.

“Its really important for the message to be clear. [The US] is committed to the security of Taiwa … but it’s about our shared values of democracy and freedom and how Taiwan has been an example to the world,” she said at a press conference, according to the Guardian. “Whether there are insecurities of the president of China relating to his own political situation I don’t know.”

During the press conference, Pelosi called Taiwan “among the freest societies in the world”, stressing that her delegation had traveled to the country “to make unequivocally clear we will not abandon our commitment to Taiwan and we are proud of our enduring friendship,” the New York Times reported.

Tsai, meanwhile, called Pelosi, “Taiwan’s most devoted friend” and presented the speaker with the Order of Propitious Clouds, an award given to Taiwanese people and foreigners who have made outstanding contributions to the country.

During her short visit, Pelosi also met several prominent human rights activists who were once imprisoned in China and visited the National Human Rights Museum in Taipei.

She concluded her visit at around 6:00 p.m local time on Wednesday.