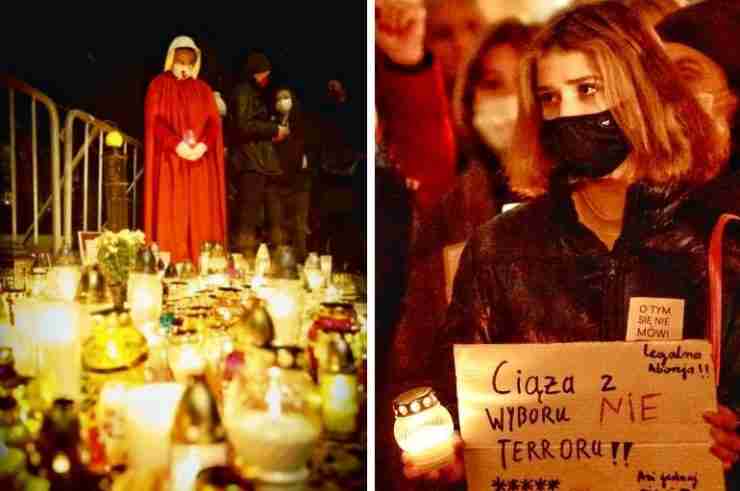 Protests have broken out across Poland after a 30-year-old woman died after she was denied an abortion due to the country’s strict abortion laws.

The woman, identified as Izabela, had been 22 weeks pregnant when she was taken to a hospital in Pszczyna in southern Poland, the lawyer representing her family said on Friday Oct. 28.

However, doctors did not perform an abortion even though her fetus lacked amniotic fluid, which can cause abnormalities and malformations in the womb, according to the Washington Post.

The lawyer said medical staff had instead told Izabela that she would only be treated after the fetus died.

The lawyer said that the doctors had waited too long to act as they were fearful of the consequences of performing an abortion, the BBC reported.

Last October, Poland outlawed abortions for fetal abnormalities, ruling that it was unconstitutional.

Abortions are now only allowed instances of rape, incest or if there is a threat to the woman’s health or life, which account for only about 2 percent of all legal abortions in Poland in recent years, according to the Guardian.

1,074 out of the 1,100 legal abortions performed in Poland last year were on the grounds of fetal abnormalities, and the ruling effectively bans abortions in the country, according to the New York Times.

The news of Izabela’s death sparked silent protests, with people holding candles, in Warsaw, Krakow, and Gdansk on Monday evening.

Women’s rights activists say Izabela is the first person to die as a result of the new law.

The hospital issued a statement on Tuesday Nov. 2 saying the doctors and midwives did everything they could to save the mother and the fetus.

While prosecutors are investigating the case, the hospital added that “all medical decisions were made taking into account the legal provisions and standards of conduct in force in Poland,” according to the Guardian.

Poland already has one of the most restrictive abortion laws in Europe, and women are often forced to seek illegal abortions or travel abroad for the procedure.

Women’s rights groups estimate that up to 200,000 abortions are performed illegally or abroad each year, according to the Guardian.

In the ruling in October 2020, the tribunal president, Julia Przyłębska, said that allowing for the abortion of fetuses that are malformed is “incompatible” with the country’s constitution.

She said that terminating a pregnancy based on the health of the fetus is “a directly forbidden form of discrimination” as the Polish Constitution guarantees a right to life, the New York Times reported.