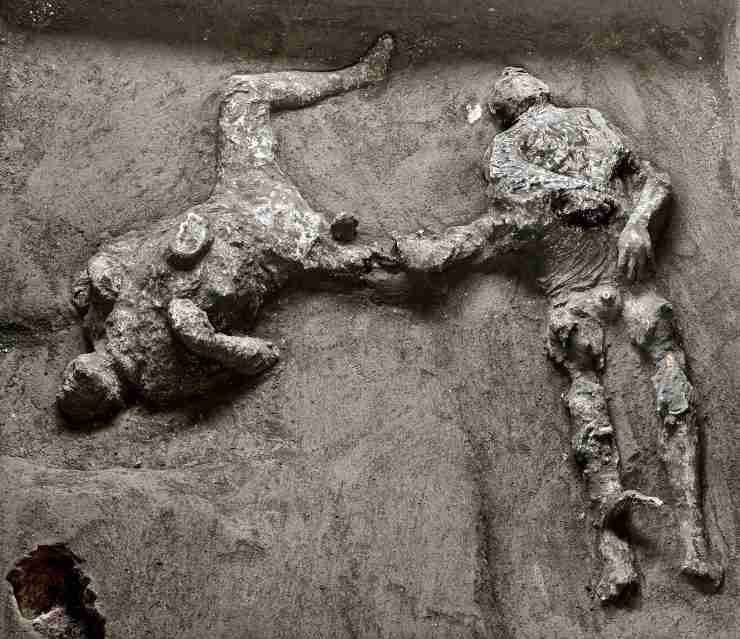 Archaeologists have discovered the remains of what appears to be a rich man and his slave who were killed in the volcanic eruption that destroyed the ancient Roman city of Pompeii almost 2,000 years ago.

Officials at the archaeological park said the skeletons of the two men lying next to each other on their backs were found during an excavation of a large villa on the outskirts of the ancient Roman city, which was destroyed by the eruption of Mount Vesuvius in 79 A.D.

The remains, covered in a layer of gray ash at least 2 meters (6.5 feet) deep, were found in a side room along an underground passageway which led to the upper level of the villa, AP reported. Officials said that the victims were probably looking for shelter in the underground space and had died by thermal shock, as demonstrated by their clenched feet and hands.

One of the men, likely aged between 18 and 23, had a spinal column with compressed discs, which led archaeologists to hypothesize that he was a young man who did manual labor, like that of a slave. The other man is estimated to be between 30 to 40 years old.

Using a technique pioneered in the 1800s that is used on all discoveries at the Pompeii site, archaeologists poured liquid chalk into the cavities of the decaying bodies that helps to make the remains seem like statues. Officials described the discovery as “an incredible and extraordinary testimony” of the morning of the eruption, the BBC reported.