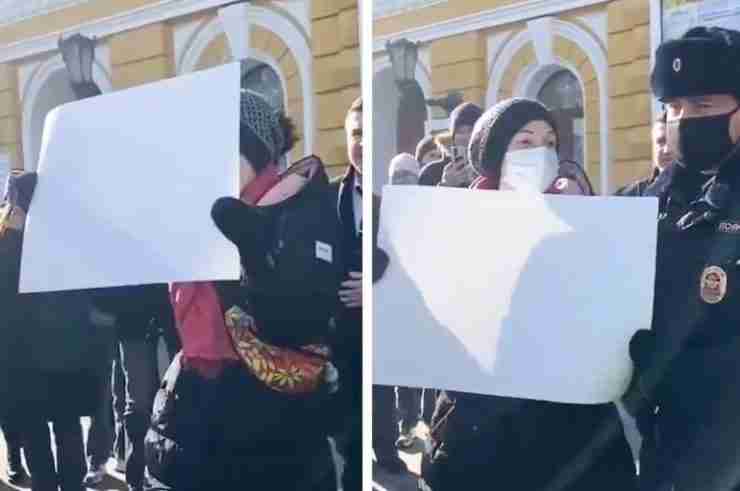 Russian police officers are arresting demonstrators for protesting with blank signs in Russia.

A video shared on Telegram showed a woman holding a blank sign surrounded by bystanders in Nizhny Novgorod, Russia before police officers approached her and escorted her away from the crowd.

“Police in Nizhny Novgorod arrested a demonstrator today for protesting with a blank sign. Welcome to Russia in 2022,” Kevin Rothrock, the editor for independent Russian media outlet Meduza, tweeted.

The video has gone viral on Twitter, where it has gained more than 4 million views.

The incident is one of many throughout Russia.

The incident is one of many throughout Russia. Activist Anastasia Nikolaeva was also arrested for eight days in Rostov-on-Don for protesting with a blank sign.

Russia has passed laws criminalizing anti-war protests and war reporting, with people facing up to 15 years in prison.

Words such as “war” and “invasion” have also been banned when describing Russia’s invasion of Ukraine.

Since Russia’s invasion of Ukraine on Feb. 24, there have been multiple protests worldwide.

In Russia, at least 14,853 protesters have been detained across 151 Russian cities, according to OVD-Info.