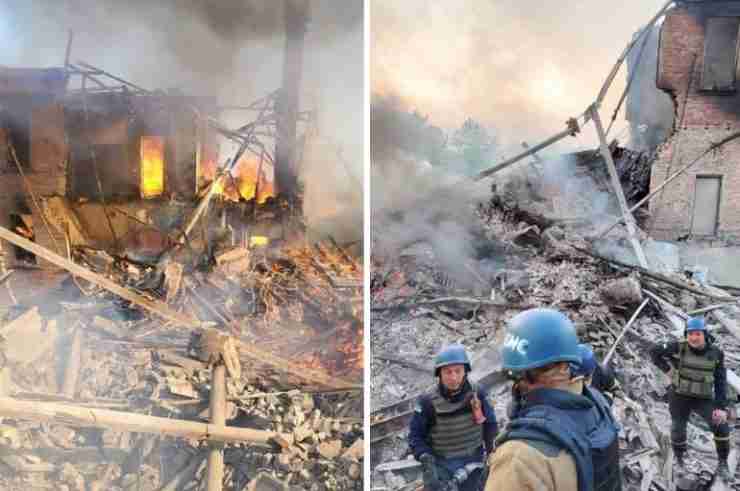 At least 60 people have been killed after a bomb exploded on a school in eastern Ukraine on Saturday May 7.

An air bomb destroyed the school building in Bilohorivka, where 90 civilians had been sheltering from attacks, according to Ukrainian officials.

Bilohorivka is located close to Ukrainian-controlled city of Severodonetsk, which experienced intensified Russian attacks over the weekend.

The bomb produced extreme high temperatures, which set the building on fire. Firefighters took around three-hours to put it down, authorities said.

The governor of Luhansk province said on Telegram that emergency personnel rescued 30 civilians, but “most likely all 60 people who remain under the rubble are now dead,” according to NPR.

“We didn’t understand anything,” one Ukrainian civilian named Sergiy, told CNN. “We were inside. All at once, everything fell down. Darkness. That’s it.”

Various international organizations, including UN Secretary General, have condemned the attack on civilians.

This is not the first time Russia has allegedly attacked civilians. Just last month, a Russian bomb attack on a maternity ward and children’s hospital in the southern Ukrainian city of Mariupol killed at least three civilians.

Russia’s attacks have escalated ahead of Victory Day on May 9, a Russian national celebration which marks the defeat of Nazi Germany during the WW2.

Russian President Vladimir Putin had promised to take control of eastern Luhansk and Donetsk regions to mark the day.