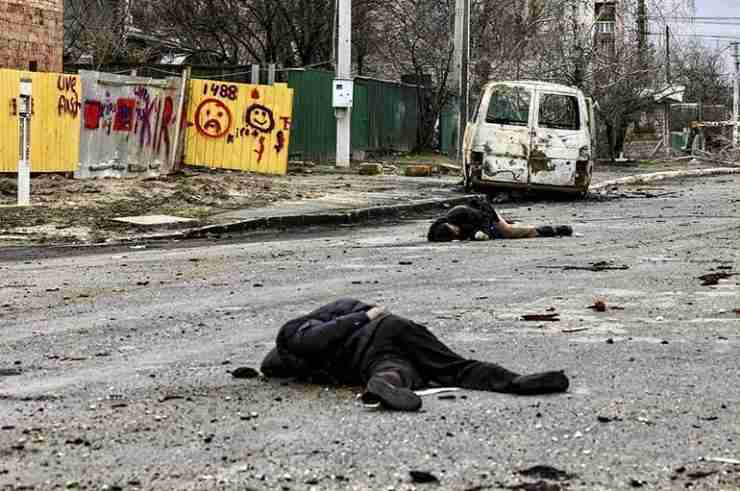 As Russian forces retreated around Kyiv on March 30 following a month of occupation, photos and videos have emerged of the bodies of civilians strewn across the streets of Bucha, a town outside of the capital, prompting global outrage.

Ukrainian forces and journalists who entered the town on Saturday April 2 were met with scenes of widespread devastation.

Journalists said they saw bodies of civilians scattered across the streets, some with their hands tied.

AFP journalists said they counted as many as 20 bodies on one street.

The BBC reported that some of the people had been shot through the temple as if they had been executed while others had been run over by tanks.

Many of the civilians appeared to have been killed while going about their daily routines, with some next to their bikes or holding bags of shopping.

Residents said the victims had been killed by the Russian troops during its occupation, Reuters reported.

Satellite imagery showed a 14 meter mass grave near a church.

The Mayor of Bucha told the Washington Post at least 270 people had been buried in mass graves, adding that the destroyed town’s streets was littered with corpses of men, women and even a 14-year-old boy.

“All these people were shot, killed, in the back of the head,” he said, Al Jazeera reported.

In a report published on April 3, Human Rights Watch said it had documented several cases of Russian forces committing war crimes against civilians, including at least one “unmistakable case” of a summary execution of civilians by Russian soldiers in Bucha on March 4.

“These are war crimes and will be recognized by the world as genocide,” Ukrainian President Volodymyr Zelenskiy said during a visit to Bucha, adding it had become more difficult to negotiate with Russia following the discovery of the alleged atrocities, Reuters reported.

Russia has denied the accusations, saying that Ukraine had staged the graves and corpses.

Ukrainian authorities said they had found 421 civilian casualties near Kyiv by Sunday April 3 and were investigating possible war crimes in Bucha, Reuters reported.

The alleged killings have prompted global condemnation and calls for harsher sanctions.