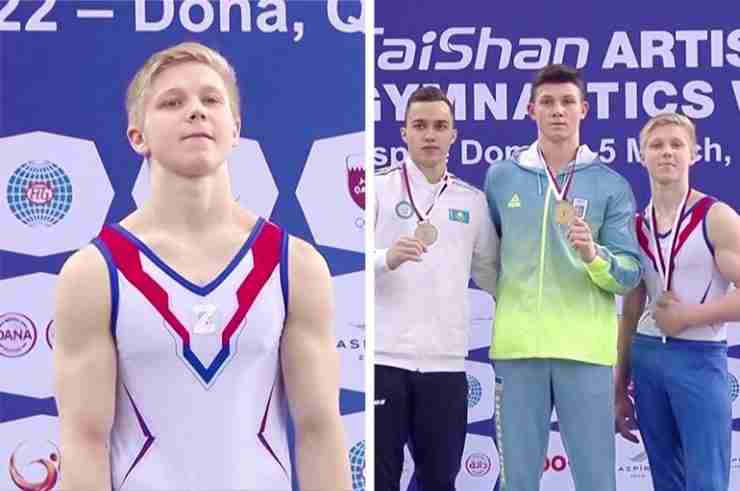 Russian gymnast Ivan Kuliak has received a one-year ban for wearing a pro-invasion “Z” symbol during the parallel bars event of the 2022 Gymnastics World Cup in Doha.

20-year-old Kuliak, who won bronze, wore a singlet with the “Z” taped on the front when he took to the podium next to Ukrainian gymnast Illia Kovtun, who won gold, on March 5.

The “Z” insignia stands for “za pobedy” or “for victory”.

It is emblazoned on Russian tanks and vehicles in the ongoing Ukrainian invasion and has become a symbol of support for Russian president Vladimir Putin’s pro-war agenda.

The International Gymnastics Federation (FIG) released a statement the next day asking the Gymnastics Ethics Foundation to open disciplinary proceedings against Kuliak.

On May 18, the Gymnastics Ethics Foundation sanctioned Kuliak for violating FIG rules. The sanctions include a 12-month ban from all FIG events and the return of his bronze medal.

“If there was a second chance and I had a choice whether to go out with the letter ‘Z’ on my chest or not, I would do the same,” he told state-controlled TV network Russia Today. “I just wanted to show my position. As an athlete, I will always fight for victory and play for peace.”

Kuliak has 21 days to file an appeal.