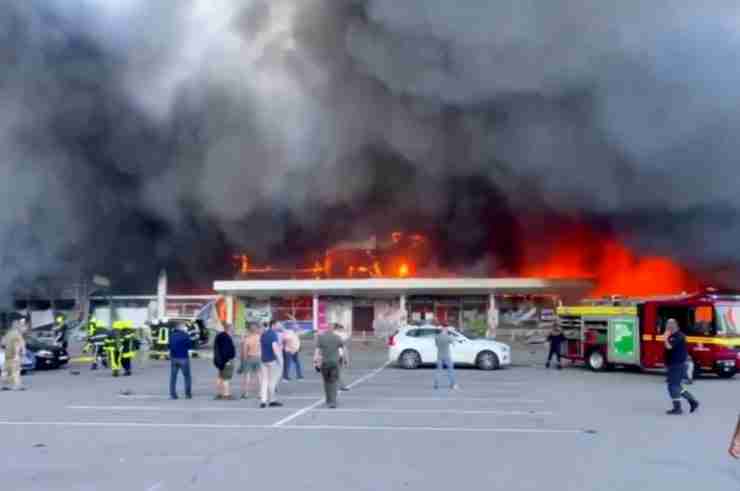 Russia struck a busy shopping mall in the central Ukrainian city of Kremenchuk with a missile on Monday June 27, killing at least 18 people and injuring about 60 others, Ukrainian authorities said.

Ukrainian president Volodymyr Zelensky said that more than 1,000 people had been inside the mall when the missile struck.

The strike set the building aflame, and video footage showed plumes of smoke rising from the wreckage of the building as emergency crew rushed in to search for victims.

“I flew head first and splinters hit my body. The whole place was collapsing,” Ludmyla Mykhailets, a 43-year-old woman who had been shopping in the mall, told Reuters from hospital, where she was being treated.

“It was hell,” her husband, 54-year-old Mykola, said, with a bloody bandage around his head.

Dozens of people are still missing, and search and efforts are continuing, local authorities said on Tuesday afternoon, adding that they did not expect to find any more people alive.

Russia’s Defense Ministry has denied hitting the mall, saying it had struck a nearby depot containing weapons supplied by the US and European countries, which led to an explosion that set the mall on fire.

International media outlets could not independently verify the claim, and Ukrainian authorities said there were no military targets within the mall’s vicinity, the New York Times reported.

“This is not an accidental hit — this is a calculated Russian strike,” Zelensky said in his evening address on Monday, calling it “one of the most defiant terrorist attacks in European history.”

G7 leaders, who are meeting at a summit in Germany, called the attack “abominable” and a war crime, saying in a statement that Russian president Vladimir Putin and those responsible will be held accountable, according to Reuters.