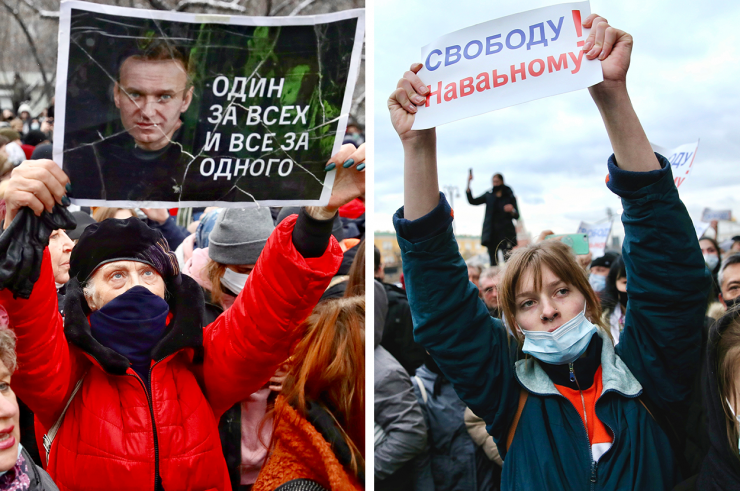 Tens of thousands of people across Russia took to the streets in unsanctioned protests on Wednesday, demanding the release of jailed opposition leader Alexei Navalny, whose health is failing in prison.

The protests took place the same day that Russian President Vladimir Putin delivered a state-of-the-nation address, when he warned the West not to cross its “red lines” and did not mention Navalny.

More than 1,700 protesters were detained by the police across the country. Police also arrested Navalny’s spokeswoman and an aide.

Navalny, who has been on a hunger strike for three weeks, was finally moved to a hospital in another prison on Monday Apr. 19 after his doctors warned that he could “die at any moment” from a heart attack or kidney failure.

Prior to being moved, Navalny had reported back pain and loss of sensation in his legs and arms, and prison doctors found slipped disks in his back. He had also been sent to a prison infirmary with a high temperature and coughing.

Doctors say he has an abnormally high level of potassium in his blood and did not rule out the lingering effects of a military-grade nerve agent poisoning that almost killed him last August.

“If you saw me now, you would laugh,” Navalny said in a letter his team posted to social media on Wednesday. “A skeleton walking, swaying, in its cell.”

Demonstrations on Wednesday took place in 29 cities, including St, Petersburg, Vladivostok, cities in the Siberia region, the central city of Vladimir, where Navalny is being held, and Moscow, where the largest rally took place.

“This is one of the last gasps of a free Russia,” Marina, a student at the Moscow protest told Reuters, “We came out for Alexei.”

Navalny was arrested in January upon returning to Moscow from Germany where he had been seeking treatment for the suspected poisoning attack by the Kremlin and sentenced to two years and eight months in prison for violating a suspended prison sentence.

His arrest sparked massive protests across the country, with thousands of people arrested in demonstrations.